Like so many other economic indicators, India’s export growth, too, is slackening. How much will that impact the economy considering India is far less globalised than other Asian economies? The best way to measure the impact is to look at the trade-GDP ratio, which is on a steady rise, as charts below prove. Underlying the sharp rise in India’s services’ exports in recent years, the net invisibles-to-GDP ratio has trebled from a mere 2.1 per cent in 2000-01 to 6.2 per cent in 2007-08. 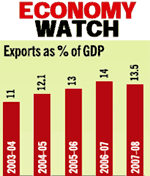