In numbers: The best of times

The year gone by witnessed unprecedented highs as well as new lows in the world of business. A few snapshots of 2008 in numbers.

141%: The percentage by which shipments of consumer notebooks grew during the first quarter of 2008, according to International Data Corporation (IDC) India. The shipment of consumer desktops dropped by 6 per cent during the same period. 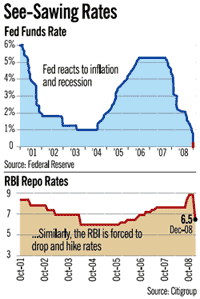 Click here to Enlarge
$17.2 billion (Rs 86,000 crore): The amount of Foreign Direct Investment (FDI) that India had seen between April and September of 2008.

$14 billion (Rs 70,000 crore): The amount of money foreign institutional investors pulled out of the Indian markets this year. It contributed to the Sensex losing over 60 per cent of its value.

12.34%: The peak rate of inflation in India, which was in the month of September.

38%: The share of public transport on the roads in six major metros: Delhi, Ahmedabad, Bangalore, Hyderabad, Mumbai and Chennai. This is a sharp drop from the 69 per cent of all vehicles that they represented between 1994 and 2007.