It’s an unkind blow in the midst of a fight for survival. At a time when economic growth is stuttering across all the major sectors in the country, the latest Global Innovation Index (GII) 2008-09 report says India has slipped to the 41st position from the previous year’s ranking of 23. 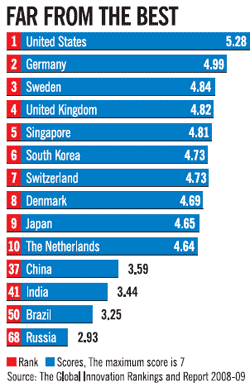 According to the report, prepared by INSEAD and Confederation of Indian Industry (CII), despite its market size, local suppliers and business clusters, India has performed poorly on various parameters such as overall literacy rate, infrastructure quality and university-industry research collaboration. The report also points out India’s poor ranking could well be a wake-up call to get its innovation act in order.

Among BRIC (Brazil, Russia, India and China) countries, the report says, unlike last year when India and China ran neck-and-neck, this time around China has overtaken India to finish 37th. The survey mentions some of India’s most innovative centres such as Bangalorebased Narayana Hrudayalaya and ITC’s e-Choupal.

The study also reveals that while the top league mostly comprises countries from Europe and Asia, some of the most challenging science- and technology-based innovation programmes are taking place in pockets of Africa, which has just one country (South Africa) in the top 50.

GII is based on 90 parameters such as political stability, control of corruption, education expenditure, culture to innovate, Internet users (per 100 people), households with TV, FDI and technological awareness. It has been compiled by collecting data from various agencies, including the UNESCO, the World Bank, and the World Economic Forum, among others.

A service to remember