Here’s another carrot that real estate developers are using to entice buyers— several realtors, especially in Bangalore, are offering no-neighbour apartments to attract big-spending customers to their properties.

Here’s another carrot that real estate developers are using to entice buyers— several realtors, especially in Bangalore, are offering no-neighbour apartments to attract big-spending customers to their properties. 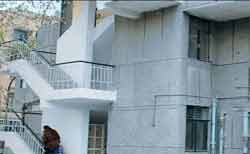 Rather than offer an overdose of “cool” add-ons such as gyms and club houses, which are now becoming commoditised, developers such as Mantri and the Pune-based Rohan Group, are now using another USP to attract buyers.

Mantri Altius, on Raj Bhavan Road, has just one unit of 5,000 sq. ft on each floor of the apartment to give residents the same privacy they would get if they were staying in their own independent houses. It’s the snob value and the perceived exclusivity that’s on offer that plays a key role in attracting high net worth apartment buyers. “Each unit is priced at Rs 13 crore and these are by far the most expensive apartments available in the city,” says Hari Menon, Vice President (Marketing), Mantri Developers.

To ensure that the identity of flat buyers conforms to the desired profile, Mantri has screened and pre-selected residents for this upscale property and all units were sold out within days of completion, he claims.

This trend is catching on and Mantri isn’t the only one helping buyers lose their annoying neighbours. Behind Bangalore Airport, Rohan Jharoka, developed by the Pune-based Rohan Group, is targeting the IT crowd with its individual apartments priced at a much more affordable Rs 35-40 lakh onwards. “We offer all the usual facilities such as a swimming pool and club house, but having a single unit in each block (one unit per floor) sets us apart from the clutter,” says a company executive. Its USP is slightly different from what Mantri offers: Rohan Jharokha offers exclusivity without charging the world for it.

In the Delhi region, builders like the Ansals had developed a few such projects in places like Gurgaon some years back. But in the current scenario of high demand for the usual “cool” apartments, realtors do not seem to have the time and inclination to get into the single-unit apartment format. Besides, they do not see it as a profitable proposition. “They are going for at least two flats per floor as the high costs in the NCR make it unprofitable for developers to build such noneighbour apartment blocks,” says an architect working with a leading developer in Greater Noida, located on the outskirts of Delhi.

TV viewing to get more expensive