PM’s Economic Advisory Council expects 2009-10 to be better than 2008-09—pleasant news in the current gloomy environment. But what underlies its optimism?

I’d rather be vaguely right than precisely wrong,” J. M. Keynes had famously said. One person who probably isn’t at pains to agree seems to be eminent professor of economics and chairman of the Prime Minister’s Economic Advisory Council S.D. Tendulkar. Right now, he is in the minority of one when it comes to the prospects of the economy in the next fiscal year. Reacting to the recently released advance estimates of the GDP growth for the year 2008-09—at 7.1 per cent—Tendulkar said he expects the 2009-10 growth rate to be even higher. That runs contrary to what every other economist foresees. Even the most optimistic projection for the 2009-10 GDP growth is 6 per cent, with most expecting a figure lower than that (see chart). So, what really gave this erudite and seasoned economist, and a trusted friend of Prime Minister Manmohan Singh, encouragement to go against the tide?

There is very little economic news in India or from abroad—which matters because this is one truly global crisis—that would suggest that the worst is over and the spring thaw is around the corner. In fact, within a few days of announcing the GDP growth estimate of 7.1 per cent for 2008-09, Central Statistical Organisation (CSO) released the industrial production figures for December 2008 which were the worst in over a decade. So, it can only be with a mix of high hopes and some precise future gazing that one can confidently predict a rosier-than-present economy in 2009-10. Yet, the implications of the divergence between Tendulkar’s and others’ estimates are significant enough to merit a serious look—it’s knowing whether our economic fortunes are about to get better or worse. 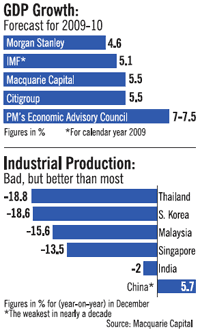 There are several plausible explanations for Tendulkar’s optimism: faith that domestic demand, though already dampened, will not collapse the way it has in several developed economies, an expectation that interest rates will soon fall further, reviving investments and the hope that the US President Barack Obama’s $800-billion stimulus package will spur global growth. Or, more than any of these, it’s likely that Tendulkar doesn’t find the data reliable. Take, for instance, the latest data for industrial output that recorded a negative growth of 2 per cent in December—the key culprit was a 12.8 per cent fall in the output of consumer durables. However, some of the biggest consumer durables companies here have a different tale to tell. Samsung India’s sales in December were up by a healthy 30 per cent over last year, riding on robust sales of LCD TVs in big cities and of CTVs, refrigerators, etc., outside the top 35 cities. Samsung estimates that the consumer durables industry grew 10 per cent in December, an estimate hard to disbelieve since research outfit ORG-GFK recorded year-on-year growths in December of 1 per cent for CTVs, 10 per cent for air-conditioners and 7 per cent for microwaves.

What explains the divergence between the CSO data and the industry’s performance? The average basket of goods. The government’s data compilers are still collating sales of telephone instruments (excluding mobile handsets) and alarm time pieces. These items still have high weights in the index of industrial output. The bad data on the factory output is more likely to be less about bad performance than about bad book-keeping by the babus. But then, talking the economy up to neutralise downward bias of faulty data should not be the way out. Faulty data can cut both ways—up or down. There are also economic indicators that would look worse, once they are corrected.

It’s also likely that fiscal stimulus— of this government and the next’s—will really do what they are meant to do, which is to hasten a recovery. And being closer to the government now than he has ever been in his long and illustrious career, the chairman of PM’s Economic Advisory Council has better faith in government interventions.