Lower crude prices is good news, but don’t count your blessings yet.

Finally! Crude prices are falling much to the relief of sectors like aviation
Lower crude prices is good news, but don’t count your blessings yet.

For the global economy, singed by the spurt in crude prices, IT’S a shot in the arm. Crude prices are now on a downward trajectory, about 30 per cent off their all-time high of over $147 (Rs 6,321) per barrel in mid-July this year. At the time of going to press, crude prices were within a whisker of the $100 (Rs 4,500) per barrel mark. The Indian economy, too, stands to gain substantially from this—particularly, the oil marketing companies (OMCs), which had been bleeding heavily from mounting underrecoveries. Lower prices will also provide a fillip to the government’s efforts to rein in inflation.

Though Petroleum Minister Murli Deora has ruled out a reduction in the retail prices of petrol and diesel, falling crude prices will still have a positive impact on the economy. For one, input costs of several important sectors—among them aviation, automobiles, power, steel and cement—will come down as prices of commodities such as aviation turbine fuel (ATF), naphtha and furnace oil, which are sold at market-determined rates, fall. Says D.K. Joshi, Principal Economist, CRISIL: ‘It will help bring inflation down to single digits in the medium term.” This could eventually lead to a softer interest rate regime and give a boost to consumption demand in the economy.

Then, if crude prices continue to soften, the government may consider the option of actually reducing pump prices. Says a senior bureaucrat: “The underrecoveries of OMCs will be lower now, and, that means the bailout package for them will cost substantially less than our earlier estimates. 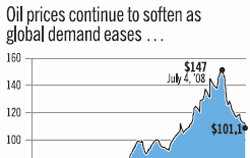 Click here to Enlarge
This will give us an opportunity to consider lowering the prices of petrol and diesel. But we ideally want prices to fall to under $90 (Rs 4,050) per barrel before we act.” Incidentally, OMCs will break even only if crude prices drop to $60 (Rs 2,700) per barrel—an unlikely scenario. But even if prices remain at $100-110 (Rs 4,500-4,950) per barrel, the cost of the proposed Rs 1.6 lakh-crore bailout package announced by the government will fall by Rs 10,000 crore. Then, a study by ASSOCHAM says the government will save $17 billion (Rs 76,500 crore) on its oil import bill.

The savings on the OMC bailout package and the lower oil import bill will help check the gaping holes both in the current account and the balance of payments and prevent a runaway depreciation of the rupee. Says Rajiv Kumar, CEO, ICRIER: “This has made RBI’s job easier. If crude had still been at $150 (Rs 6,750) levels, the rupee might have fallen further.” But the big question is: will the downtrend in oil prices continue? The International Energy Agency has lowered its global energy demand forecast for both 2008 and 2009. World demand will average 86.8 million barrels per day in 2008, according to IEA’s latest Oil Market Report. That’s 100,000 barrels per day lower than its earlier estimate.

In 2009, the IEA estimates the global demand will average 87.6 million barrels per day, or 140,000 barrels per day lower than the previously reported figure. On the basis of these altered demand-supply dynamics, CRISIL estimates that crude prices will continue to soften and forecasts a price band of $96-99 (Rs 4,320-4,455) per barrel for the rest of this financial year. The worst, thus, seems to be over on the crude oil front. And that will provide some solace to the government and India Inc. at a time when the economy is noticeably slowing down.