Oil prices fell as sharply as they had risen in ’08, making it the best news of the year-end. But supply and cost considerations point to an upturn in 2009.

As economic growth sags to levels unprecedented in recent years across the world, India has had some cause for joy from the southward-bound global crude oil prices. From a high of $147 a barrel as late as July 2008, oil prices shaved-off more than 70 per cent to skirt around $40 in December.

If erstwhile crude oil bulls are to be believed, then the slide shall continue, maybe towards the $25-30 range. For a country, which imports 70 per cent of its requirement this surely is cause for cheer. But for how long?

Though the price of crude oil derivatives is still administered, a drop in prices has helped ease inflation, allowing swifter and sharper interest rate cuts. The recent slashing of prices of key retail fuels should spur consumption as well. But is the good news going to last and for how long? Have oil prices already touched the bottom? Answers to these questions will influence the economic fortunes of countries, companies and individuals in 2009.

“If I knew the exact price of oil ten minutes from now, I could resign from my job and become a billionaire,” is what outgoing CEO of Saudi Aramaco Abdullah Jum’ah said recently in Delhi. There is a growing consensus among analysts and oil producers, though, that crude oil prices have fallen too fast, too soon and a reversal is all but certain. Evidence of those beliefs comes from the prices at which the future contracts for oil, to be delivered several years in the future, are selling. These are significantly higher prices than the price of oil for delivery early next year.

Abdullah Jum’ah
What could be the reasons for the anticipated spike? For one, the demand-supply equation has not changed significantly to warrant the steep decline, just as the same realities did not justify the climb to $147 a barrel. According to World Energy Outlook (WEO) 2008, primary demand for oil (excluding biofuels) rises by 1 per cent per year on an average, and is estimated to go from 85 million barrels per day in 2007 to 106 million barrels a day in 2030.

Much of the projected increase will come from China and India. This growth, while moderate, is expected to chug along before picking up when the world economy turns around. 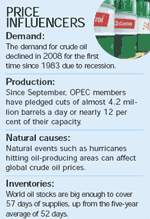 Click here to Enlarge
However, demand alone is not the only arbiter of prices. Supplies are contracting concomitantly aided by cuts from oil producers. The primarily West Asiabased Organisation of Petroleum Exporting Countries (OPEC), which controls about 40 per cent of the world’s supplies has cut its production and plans more drastic cuts if prices continue to drop.

What will aid such cartelisation is the fact that the era of cheap oil is truly over. To constantly produce oil at current levels, investment needs to continue apace. “Most of what is left to be discovered is hard oil—frontier fields, oil sands, shales, deep sea oil—all of which require much higher investments,” says Deepak Mahurkar, Associate Director, PricewaterhouseCoopers.

Mahurkar believes that if oil persists at current levels of sub-$50 per barrel, six months down the line many exploration projects would slow down. “This may lead to a price rise far worse than $147 a barrel because there would be no assets to bring in additional supplies into the market,” he says. Indeed, Royal Dutch Shell has announced a delay in some projects already.

So where will the needle rest? Saudi King Abdullah believes that the optimum level is $75. Others believe that a range of $60-80 is more sustainable. At a conference in November, Indian Petroleum Minister Murli Deora cited forecasts by international analysts expecting oil prices to remain at around $75-115 in 2009, subject to the impact of the economic downturn. Of course those estimates have been cut back.

Even if global trends skew Deora’s expected range downwards, it is quite clear that oil prices will remain volatile in the coming year—with the top being higher than the prices prevailing right now.
TweetYoutube

In numbers: The best of times