The differences between the UPA government and the LEFT parties over the India-US nuclear deal seem to be pushing the country towards mid-term general elections.

The differences between the UPA government and the LEFT parties over the India-US nuclear deal seem to be pushing the country towards mid-term general elections. This may well mean the onset of a nuclear winter for several reform measures that are awaiting the approval both from the government as well as from Parliament.

For industry, a key issue is the reform of labour laws. The Textiles Ministry has proposed that export units be allowed to follow a “hire and fire” policy, but officials say it will face opposition when the Cabinet takes it up for discussion.

Says Soumitra Choudhury, Economic Advisor at ICRA and a member of the Prime Minister’s Economic Advisory Council: “The issue of labour reforms has been a long standing one but its relevance in the present context, where we have a major shortage both of skilled and unskilled labour, has diminished to a great degree.”

On the other hand, a key aspect of the foreign direct investment policy, expected later this month, is job creation. “The government is looking at how FDI can be used to generate employment,” said Commerce Minister Kamal Nath on the sidelines of a textile summit in New Delhi. 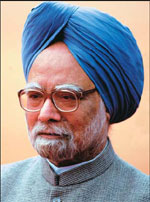 This, expectedly, is likely to sail through, as will a proposal for increasing the FDI limit in aviation, but no new initiatives are likely in politically sensitive sectors like retailing.

On the PSU front, equity offerings might very well be reduced to a trickle, Finance Ministry officials point out. On the cards are offerings from NTPC, State Bank of India, and Rural Electrification Corporation. Will they happen? No one is sure.

If getting an executive nod from the government on sensitive reform measures is proving tough, getting approval for such measures from Parliament will be well nigh impossible.

And, several key proposals are gathering dust for want of political will. Now, these may well have to wait for a new government to bring them out of cold storage. In this category is the Pension Bill, which seeks to allow private sector fund managers to operate the New Pension Scheme for government employees. And even as the government’s collective foot eases off the reforms pedal, it presses down further on the populism pedal. For starters, the vaulting price of crude oil in the global market has not moved the government to raise consumer prices.

Rather, it chooses to postpone the problem by issuing bonds to public sector oil companies, which the next government will have to redeem.

Then, there are other measures that may severely dent the exchequer. The government could implement the recommendations of the Sixth Pay Commission, and in a bow to populism, raise the salaries of the bureaucracy without undertaking retrenchments.

For the industry, it improves the prospects of getting the government to dole out concessions. The temptation is only reasonable: the tax payer does not fund elections.

The bottom line: reform measures will now be viewed with a prism that filters only those measures that do not cause pain.

Governance pays off for states