The latest GDP growth figures for the first quarter of the current financial year reveal that it has grown by just 7.9 per cent. CMIE says GDP will grow at 9 per cent this year. Others peg it much lower. So, what’s the right answer?

Rishi Joshi
The tide seems to have ebbed for the Indian Economy. The latest GDP growth figures for the first quarter of the current financial year reveal that it has grown by just 7.9 per cent, its slowest pace in three years, compared to the previous quarter’s growth rate of 8.8 per cent and the 9.2 per cent expansion clocked in the previous corresponding quarter. 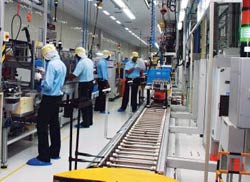 Humming along: But, the question is, how loudly?
Yet, Mumbai-based think tank, the Centre for Monitoring Indian Economy (CMIE), which has, arguably, the most extensive database on the Indian economy outside the government, has been insisting that the economy will maintain its trajectory and grow at more than 9 per cent.

So, how fast will the economy grow over the medium term? Most estimates range between 7 per cent and 8 per cent. International rating agency Moody’s believes that India’s economic growth will slow down to just below 8 per cent this financial year as a result of rising interest rates, higher inflation and slow credit growth. The Prime Minister’s Economic Advisory Council and economic think tank NCAER have made similar forecasts, projecting GDP growth at 7.5-8 per cent.

Some economists, though, feel the worst may not be over. Says Rajiv Kumar, Director & Chief Executive, ICRIER: “The first quarter numbers may be the beginning of a downturn. Over the next few quarters, we are likely to see the full impact of the tight monetary policy being followed by the Reserve Bank of India, which could result in a further slowdown in growth.” Kumar expects the GDP growth rate in 2008-09 to be closer to 7 per cent than 8 per cent.

The debate over the issue would have been considered settled in favour of a figure between 7 per cent and 8 per cent but for the fact that CMIE, one of India’s best-known data aggregators and analysts, has been clinging stubbornly to its 9 per cent-plus forecast. In fact, it is confident that despite the first quarter figures, a 9.5 per cent growth rate is still achievable during the full financial year.

It expects growth to be driven by the flow of fresh capital investments. According to its estimates, projects entailing investments of Rs 48,284 crore were commissioned between April 1, 2008 and July 31, 2008. Then, it says, a further Rs 2,69,246 crore in projects are scheduled for completion during the remaining part of 2008-09. This, it feels, will drive growth. RBI’s tight money policy, CMIE asserts, is unlikely to have any adverse impact on the commissioning of these project as interest costs account for just 1.5 per cent of the sales of the manufacturing sector. Says Mahesh Vyas, Director, CMIE: “We expect a lot of capacities to be commissioned during the third and fourth quarters, which will drive growth.” Most economists, however, don’t accept this argument. Their contention is that the economy is expanding at 8 per cent precisely because of the robust project pipeline that CMIE is referring to. Besides, hardening interest rates will impact at least some of these investments. Says D.K Joshi, Principal Economist, CRISIL: “Let’s not forget that high interest rates are hurting demand in the economy. This will lead to a slowdown in fresh investments in the economy as companies will not want to be left saddled with overcapacity.”

The consensus, then, among economists not affiliated to CMIE, is that a 9 per cent-plus growth rate may well be beyond reach but that the economy still has enough momentum to meet the government’s target growth rate of about 8 per cent. And that’s not bad going. Says Amit Mitra, Director General, FICCI: “At 8 per cent, the Indian economy will remain among the fastest growing economies in the world.”