Is India Inc. prepared to deal with the volatility in the Indian currency?

Exports are growing: But, there are concerns as well
How will this impact India Inc.? Prima facie, the weaker rupee should boost exports. IT companies, in particular, will benefit. Says Som Mittal, President, NASSCOM: “The rupee falling back to 45-46 levels has come as a big reprieve.” On an average, a 1 per cent depreciation in the rupee boosts the operating margin of the Indian IT industry by 25-30 BPS. However, some of these gains could be offset by hedging losses. The results for the April-June 2008-09 quarter showed significantly large mark-to-market losses incurred on hedging by these companies. Then, IT majors like HCL Technologies have warned of a further hit in the present quarter. Says Mittal: “A volatile currency makes it difficult to gauge how much currency risk to factor in on long-term contracts.”

Merchandise exporters, particularly in the textiles, leather and handicrafts sectors, which were, till recently, reeling under the impact of a rising rupee, are also relieved. Says Sudhir Dhingra, CMD of garments export Orient Craft: “The falling rupee is a big relief at a time when our traditional markets in US and Europe are slowing down. My estimate is that about 25 per cent of our order book right now is due to the currency advantage we’re enjoying over countries like China.” Other exportoriented sectors, like auto components, too, have gained. Says Ashok Taneja, President & CEO, Shriram Pistons, an exporter of pistons, rings and engine valves: “We’re now able to out-price our competitors in China and Brazil. The current rupee level is just right for exports to take off.” It’s not all smooth sailing, though. Exporters now have to contend with clients who want to renegotiate contracts due to the softening rupee. In many cases, they have had to pass on 20-25 per cent of the exchange rate gains to clients. Overall exports, though, have still been clocking an impressive growth of over 25 per cent and are expected to hit the target of $200 billion (Rs 9,20,000 crore) this fiscal—despite the global slowdown. 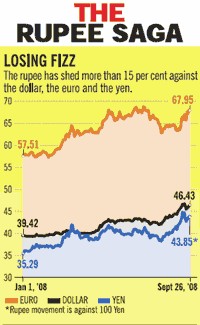 Click here to Enlarge
But there’s a need to temper the euphoria. That’s because the rupee is not the only currency that has weakened against the dollar. Currencies of other Asian countries, like Malaysia, the Philippines, Taiwan and Singapore, have also weakened 5-10 per cent this year. Indian exporters still have a relative advantage as the rupee has depreciated more than most other Asian currencies. Says Abheek Barua, Chief Economist, HDFC Bank: “This is largely due to India’s swelling current account deficit.”

A weaker domestic currency will also make imports dearer. This should, theoretically, curb imports and improve the trade balance. However, imports of commodities, like oil, whose demand is relatively inelastic, could prove to be a spoiler. Then, companies that are net importers will also be hit. Says B.R. Jaju, CFO, Crompton Greaves, which manufactures power generation equipment: “About 25-30 per cent of capital goods companies will feel the pinch.”

A weaker rupee has implications for the macro economy, too. Says Sachchidanand Shukla, Economist, Enam: “India’s oil and fertiliser subsidy bills will mount. Our estimate is that if the rupee depreciates beyond 47, it will worry RBI.” Analysts, however, say the rupee is unlikely to weaken significantly from here, and, in fact, expect a trend reversal by the end of the calendar year. Says Sanjeev Prasad, Head of Research, Kotak Securities: “There’s no reason for the dollar to be strong. The liquidity injected by the $700-billion (Rs 32,20,000 crore) bailout package for the US financial system itself will put pressure on the dollar to depreciate.”

Then, economists feel, substantial inflows in the capital account are likely over the next few months through FDI, debt and private equity, which should help the rupee appreciate. Experts feel that rupee at 45-46 is the optimal level for the rupee at which exporters will gain significantly without hitting importers hard. Says Shukla: “The rupee staying at the present levels is the best case scenario. However, we expect it to firm up to 43 levels .” Clearly, rupee volatility is here to stay in the medium to short term.