The worst is yet to come

A government economist and a regulator eschew optimism to give more reasonable growth estimates. 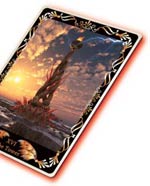 It’s official. Well almost. Two new growth forecasts were made last fortnight—one by Planning Commission member Kirit Parekh and the other by RBI Governor D. Subbarao. The latter has suggested that 2009-10 could be more challenging for the economy than 2008-09 was. While Parekh works out a conservative and optimistic estimate for growth in 2009-10, Subbarao explains why things could actually get worse. What sets the two analyses apart from other growth estimates being talked about— besides the weight of the two forecasters’ positions—are sound arguments and the clarity of the two men’s thoughts.

Subbarao doesn’t give an exact time-frame for the recovery, though he has a definite explanation why it won’t happen in a hurry. In New Delhi, he declared on March 26 that “growth moderation is likely to be steeper than we thought,” and that “fiscal 2009-10 is likely to be more challenging than 2008-09.” The Governor’s simple explanation for this is rooted in logic and arithmetic: Fiscal 2008-09 benefitted from two quarters of growth that were not impacted by crises. Further, with investment demand on the decline, corporate margins have suffered.

“Business groups and individuals also tell me that the option of brownfield projects of the kind that were underway in 2008-09 is now exhausted,” he says.

Investment decisions that are being deferred are unlikely to be revived until the economy bounces back. India, he believes, cannot return to the growth path until the world economy stabilises.

Kirit Parekh
Parekh, however, says greater private investments in 2009-10 can be expected if appropriate stimulus measures are taken. His calculations, made at the behest of Prime Minister Manmohan Singh, for the G-20 summit in London, are based on two sets of factors that are affecting growth in opposite ways: The shocks from the global downturn that are depressing it and the policy antidotes announced that will raise it.

The net effect, according to him, would be a rather low-growth rate of 6.3 per cent in 2009-10, which can be pushed up to 7.4 per cent with doses of public investments in construction (See Push vs Pull). The Prime Minister’s Office has not put Parekh’s paper in the public domain yet. 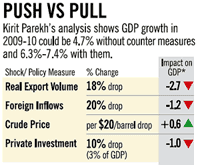 Click here to Enlarge
Interestingly, neither Parekh nor Subbarao seem to agree with the popular view about India’s fiscal position. “If the deficit is the outcome of investment which will increase output in a short period and which does not create vested interest for continued expenditure year after year, then a high fiscal deficit should pose no problem,” says Parekh. Subbarao, who was the Finance Secretary before moving to Mint Street, is even more categorical: “I think the government did the right thing by relaxing its fiscal responsibility targets, since an extraordinary situation does call for extraordinary action.”

His list of positives include low rate of inflation, modest current account deficit, lower crude prices and considerable forex reserves. He also counts the limited wealthloss effect and the normality in the manner of functioning of the financial markets despite the deep turmoil as positives. Parekh’s forecasts for 2009-10 include: exports growth of 6 per cent in constant dollars, a 10 per cent decline or a 20 per cent surge in foreign inflows, depending on whether remittances from overseas will fall or Indians working abroad will lose jobs and return home, bringing back their accumulated savings resulting in a one-time jump.
TweetYoutube