Here's a look at the who and what hogging the limelight this fortnight.

“Every office should have single, ambitious women,” says a senior bureaucrat in the Finance Ministry, adding: “They are the only ones who can work from 7 a.m. to 9 p.m. without complaining.” He then jokingly adds that ARBIND MODI is the Finance Ministry’s ‘single dedicated woman’. Modi is singularly passionate about tax policy. The Joint Secretary in the Department of Revenue has the distinction of being involved in the authoring of every major report or policy on taxes in the last few years.

For UPA 1, he played a major role in scripting the Direct Tax Code under the then Finance Minister P. Chidambaram. Now, he’s busy thrashing out the key to Independent India’s greatest tax reform—the formula for sharing revenue with the states from Goods & Sales Tax. “The Direct Tax Code isn’t just a handbook for how to raise revenue. It attempts to reshape saving, consumption and production behaviour of Indians for the decades to come,” says Modi. 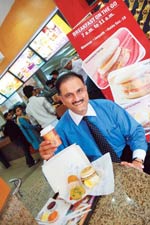 After advertising lower ‘old’ prices for some of its products, McDonald’s in India is ready to take the plunge once again—this time by reducing the price of its higher-end meals. The rationale, says the company’s Managing Director (North and East India) VIKRAM BAKSHI, is that increased volumes will more than make up for the drop in prices.

In the process, Bakshi hopes many McBurger loyalists will increase the frequency of their trips to the outlets. Was the move necessary at a time when food prices are soaring and reducing prices could affect the margins? Bakshi is upbeat. “You don’t take margins to the bank. You take rupees to the bank, and I believe we will more than protect our margins anyway,” he quips. One will have to take Bakshi’s word for it. He, after all, claims to have successfully ‘McDonalised’ many people in India. Now which parent will disagree with that?

Apple’s latest iteration of its OS X operating system keeps the feline theme with names, but Snow Leopard is a highly tweaked new product. If you have spent a lot of money in the recent past buying one of the cool new MacBook Pro’s from Apple (which ran the Leopard variant of OS X), you could consider this $30 (Rs 1,440) upgrade. Think of this as adding a turbocharger to the car where there are few differences on the outside, but the speed just shoots up. Apple’s engineers have optimised the operating system to take advantage of the new multi-core processors from Intel that their computers use.

The Parliamentary elections have just got over in Japan on August 30 and the bitter winter months are still some time away. It’s just the right time then to visit the Land of the Rising Sun. There is a lot to see in the capital city of Tokyo. The Disneyland is the most visited theme park in Asia and just an hour’s drive away is the sacred Mt. Takao. It boasts of hiking courses, historic temples and an exhilarating view from the summit. It’s also worth visiting the famous Tsukiji market to enjoy a traditional sushi and fish breakfast. Travelling in the Tokyo subway is simple if you buy a Suica Card to avoid the hassle of constantly buying tickets. The bitter cold of northern Europe where he worked for Schlumberger and had to visit oil rigs at odd hours, perhaps, drove P.M.S. PRASAD to seek warmer climes. He returned to India and joined Reliance Industries way back in the early 1980s. Over 28 years later, Prasad knows he made the right choice. In August, he was appointed Executive Director on the Board of RIL.

The 56-year-old, who is in charge of the oil exploration & production business, is the second executive in the history of Reliance (after H.S. Kohli) to be elevated to the Board after a long career in the company. Of late, he is the only senior executive in RIL who has freely interacted with the media and is the official spokesperson of the Mukesh Ambani-controlled company in the battle with brother Anil.

In his early years, Prasad probably rued the fact that a sudden illness prevented him from joining a medical course to become a doctor, even though he had qualified for it. Today, he may wonder if it wasn’t a blessing in disguise.