The return of co-founder N.R. Narayana Murthy as executive chairman notwithstanding, a whopping 36,268 software engineers at medium and lateral levels left the IT bellwether during the last 12 months. 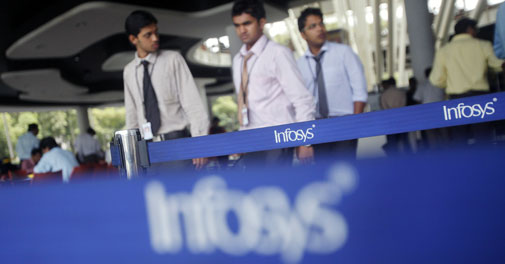 It is not only senior executives who have left or are leaving India's iconic software firm Infosys, but also its young techies in droves.

The return of co-founder N.R. Narayana Murthy from retirement as executive chairman June 1, 2013 notwithstanding, a whopping 36,268 software engineers at medium and lateral levels left the IT bellwether during the last 12 months.

"We had the highest attrition rate of 18.7 per cent during last fiscal (2013-14), including the fourth quarter, as 8,996 employees left between January-March for various reasons, including higher studies and in pursuit of better jobs," Infosys chief executive SD Shibulal told IANS on Tuesday.

Of the exits, 1.5 per cent were involuntary, meaning they were fired for non-performance, as Murthy had hinted on his return that non-performers would have to go.

Since Murthy took over the reins with his prodigal son Rohan Murthy as his executive assistant, nearly 10 senior executives, including directors, have left the company.

Even Shibulal has expressed the desire to leave before superannuation in March 2015, when he turns 60, the age the company's board set for executives to retire.

To halt more exits, the company gave a 6-7 per cent compensation hike for new new fiscal (2014-15) to offshore (domestic) employees and 1-2 per cent hike to onshore (overseas) engineers, besides promotions and progressions.

"We also gave 6-8 per cent compensation hike for offshore employees and 3 per cent for onsite employees in May and June last year. We are recruiting about 200 people for sales this fiscal (FY 2015) from the best of the global business schools, including Harvard, MIT and Stanford," Shibulal said.

In fact, the company's nominations committee has begun searching for a successor to 59-year-old Shibulal, who is looking forward to quit as early as January 9, 2015 when the board will meet to finalise financial results for third quarter (Oct-Dec) of FY2015.

The board has also appointed executive search firm Egon Zehnder to assist the committee in identifying an external list of candidates.

The company's twin presidents, BG Srinivas and UB Pravin Rao, are in race for the top post as internal candidates, as hinted by Murthy in January at Mysore, about 150 km from Bangalore.

Srinivas and Rao, who are also on the board as directors, were elevated to their new posts in January and report to Shibulal.

Srinivas is in-charge of global markets, while Rao looks after global delivery and service innovation.

Murthy co-founded the blue-chip company in 1981 along with NS Raghavan, S Gopalakrishnan, Nandan Nilekani, Shibulal and K Dinesh, who resigned in April 2011.

Gopalakrishnan, who was co-chairman when K.V. Kamath was appointed chairman from April 2011 to May 31, 2013, has been re-designated as executive vice chairman on Murthy's return.

Among the executives who resigned during the last eight-nine months are board director and former chief financial officer V. Balakrishnan, its US-based consulting subsidiary head Stephen Pratt, another board member Ashok Vemuri and global sales head Basab Pradhan.

Balakrishnan joined the fledgling Aam Aadmi Party (AAP) to contest from the Bangalore Central Lok Sabha constituency in the April 17 general elections, while Vemuri joined the US-based leading IT firm iGate Corporation as its chief executive.

Infosys: Murthys to log out at the same time