Ashok Vemuri, member of the Board at Infosys, has resigned. Vemuri was seen as a potential CEO candidate after current founder-CEO S.D. Shibulal's term ends. Ashok Vemuri, member of the Board at Infosys, has resigned. Vemuri was seen as a potential CEO candidate after current founder-CEO S.D. Shibulal's term ends.

It is not immediately clear why Vemuri quit although there are murmurs he may be in the running for the top job at iGate, a post that fell vacant after its CEO Phaneesh Murthy was sacked on charges of sexual harassment. 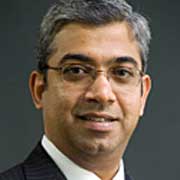 Ashok Vemuri
In a statement, Infosys said Vemuri has decided to leave the company. "Ashok has been an integral part of the Infosys journey over the last fifteen years. He has played a significant role in building the company's market leadership in the Financial Services and Manufacturing verticals and in North America. We would like to thank him for his significant contributions to Infosys in different leadership roles during his career and wish him the very best," the statement said.

Infosys stated that the transition plan is in place and Sanjay Jalona, currently the Regional Head for Manufacturing in North America, will take over as the Global Head of Manufacturing, a role Vemuri was in-charge of.

Vemuri's resignation could be a significant blow for Infosys that is struggling to claw back lost momentum after under-performing over the last two years.