In another senior-level exit at Infosys, Kartik Jayaraman, heading BPO sales in Australia, has quit and joined outsourcing major Accenture. 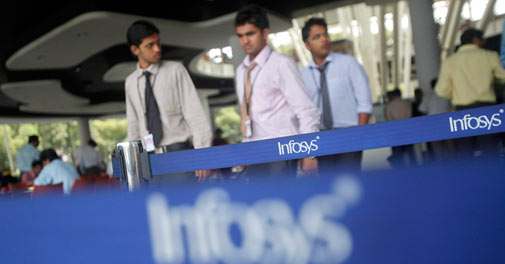 In another senior-level exit at Infosys, Kartik Jayaraman, heading BPO sales in Australia, has quit and joined outsourcing major Accenture.

Jayaraman, who joined Infosys' BPO services in the US in 2006, was based in Melbourne (Australia), sources said.

He has joined Accenture's Melbourne office this month, they added.

When contacted, a Infosys spokesperson said: "We do not discuss the entry and exit of our employees beyond our senior management."

Infosys, the country's second largest software services exporter, has been witnessing an exodus of its senior executives in the past few months.

In August, Ashok Vemuri who was heading the company's operations in the Americas put in his papers. Infosys Vice President and financial services head for the Americas Sudhir Chaturvedi also quit the same month.

The high-level exits come amidst organisational restructuring that executive chairman NR Narayana Murthy is now overseeing after returning to revive the sagging fortunes of the company in June.

Earlier in September this year, Infosys's co-founder had said at the ninth Motilal Oswal Global Investor Conference that the Bangalore-based firm is looking at eliminating unnecessary costs.

"We are looking at eliminating unnecessary costs, we are doing location optimisation...," Murthy had said.

He further said: "...I am personally leading the change to increase our engagement with employees, communicate the company's mission to our workforce and clearly set out expectations for personal productivity and outcome."

Once considered an industry bellwether with quarterly and annual guidance, Infosys is now struggling to keep pace with the rest of the industry.

It has not only stopped the practice of issuing quarterly forecast, it expects to grow only 8-10 per cent for 2013-14, way below 12-14 per cent growth industry body Nasscom has forecast.