The Facebook CEO's wealth soared to $47.9 billion this week after the social media website's stock climbed 12 per cent following a strong quarterly earnings report, according to Forbes. Mark Zuckerberg has become the world's sixth richest person and fourth wealthiest in the US - while he was on two-month paternity leave. 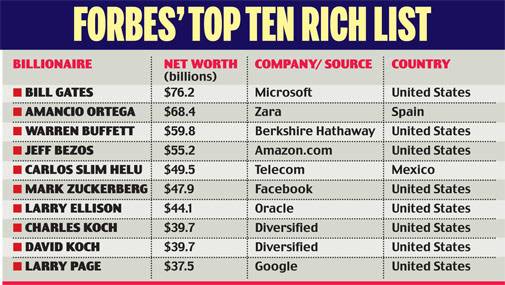 The Facebook CEO's wealth soared to $47.9 billion this week after the social media website's stock climbed 12 per cent following a strong quarterly earnings report, according to Forbes. The 31-year-old is now the youngest person on the world's top ten richest list where he sits above Google founder Larry Page, the Koch brothers and most recently, Oracle's Larry Ellison.

Zuckerberg only entered the top ten list at the end of last year when he was catapulted from 14th in 2014 into seventh on the strength of his impressive fortune. Microsoft Chairman Bill Gates is still the richest person in the world. His fortune currently stands at $76.2 billion. Behind Gates is Zara founder Amancio Ortega who has a real time net worth of around $68.4 billion.

Last year, Zuckerberg and his wife, Priscilla Chan, announced a $120-million donation to improve education in the San Francisco Bay area. Mark has been on paternity leave since the birth of his daughter, Maxima in November when his net worth was estimated at $47.1 billion. He only returned to work last Monday. Max is now the heir to the Silicon Valley tycoon's $46 billion fortune.

The couple revealed that they plan on donating 99 per cent of their Facebook shares to worthy causes. Zuckerberg first appeared on Forbes' 400 richest people in America in September 2009 with a net worth of $2 billion - two years before Facebook's IPO in May 2012.

10 things to know about Ratan Tata's spate of investments

5 reasons why you must take travel insurance