On April 10, the British Foreign and Commonwealth Office said Queen Elizabeth bestowed the Knight Grand Cross award on Tata "for services to England/India relations, inward investment to England and philanthropy." 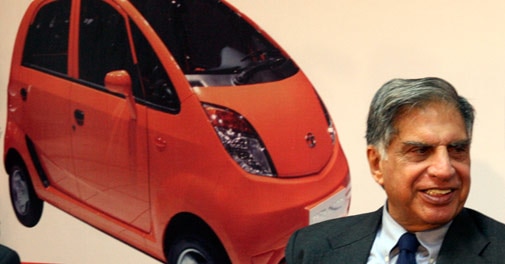 Tata Group Chairman Emeritus Ratan Tata has thanked the British government for awarding him one of its highest civilian honours, the Knight Grand Cross, in recognition for the work his group is doing in the island nation.

"I am deeply touched and feel greatly honoured to receive the recognition so graciously bestowed on me by Her Majesty. It has been a privilege to endeavour to have our enterprises contribute positively to the growth and standing of Britain," 76-year-old Tata said in a statement.

The Tata Group is one of the largest manufacturing companies and the largest employer in Britain today with its Corus Steel and JLR facilities, which together employ almost 60,000 people.

On April 10, the British Foreign and Commonwealth Office said Queen Elizabeth bestowed the Knight Grand Cross award on Tata "for services to England/India relations, inward investment to England and philanthropy."

Tata is the only Indian among five foreigners to be awarded the honour this year. The others include Japanese and Greek nationals for their services to economic and cultural ties with Britain.

"I am also deeply appreciative of the support we have always received personally from David Cameron and his government, through good and bad times. This support and faith have been of immeasurable value throughout. But none of what we have been able to achieve could ever have been possible without the unflinching trust, commitment and dedication of the people within our enterprises in Britain," the statement from Tata said.

"I have been most closely associated with Jaguar Land Rover where I have witnessed at close quarters the tremendous leadership and the impressive spirit of the workforce working together to achieve the goal we have set "to restore these two venerable English brands to their earlier glory," he said.

Thanking all the employees in England, he said, "To all these wonderful people I owe my most grateful thanks."

Tata was conferred the Knight Commander by the Queen in 2009, a year after his conglomerate acquired the flagging British luxury car brands JLR.

Besides business, Ratan Tata is recognised for his contributions across various fields in Britain, including academia.

The Sir Ratan Tata Fellowship, now in its 18th year, offered in collaboration with the London School of Economics, provides an eight-month fellowship to scholars in social sciences with experience of research on South Asia to work at the LSE Asia Research Centre.

'Inequality, deprivation and injustice all around us'