Stating that Tata was the most suitable candidate for the CII President's award, the finance minister said it's a no-brainer that the jury chose the renowned industrialist as such an award can only be given to Tata. 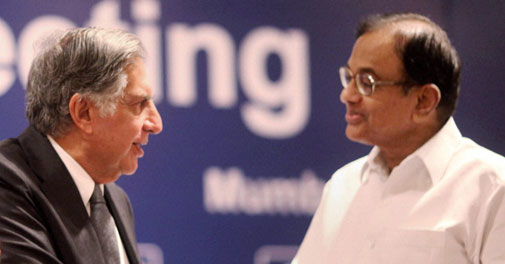 With a large gathering of corporate leaders in attendance at the function in Mumbai even as the master blaster plays his last test match at the nearby Wankhede Stadium, the finance minister said: "Ratan (Tata) is as big a draw as Sachin."

Stating that Tata was the most suitable candidate for the Confederation of Indian Industry (CII) President's award, Chidambaram said it's a no-brainer that the jury chose the renowned industrialist as such an award can only be given to Tata.

"I admire Ratan for his frugality...I admire him for his few words, for creating millions of jobs in the country and thousands abroad...I admire Ratan for drawing a sand line between corporate management and control. Industrial houses should emulate what Ratan has established in his Group."

About the award, Godrej, the previous president of CII, said: "The award has been instituted to be given to an eminent industry representative for his overall contribution to the industry and society and also for his global repute. As such, the award represents the highest recognition that industry can accord to its members. I am advised by the jury that our first award did not require much brainstorming and that the decision on selecting Tata was unanimous."

Tata said he was humbled by the honour and recalled how late Prime Minister Rajiv Gandhi had appreciated the role of the CII in transforming the country.

Recalling his statement about not wanting to be taken out of Bombay House, the Tata Group headquarters, in a coffin as there is life beyond the boardroom - the reason for his decision to retire at 75 - Tata said he is happy he could meet his commitment to call it a day when he was in good health. Even after pleas by shareholders to reverse his decision, Tata stood his ground and retired as Chairman of the salt-to-software group on December 28, 2012.

Later, talking to the media, Tata said he is confident that the economy and the country will continue to march on the path of progress.

Rival players in India Inc working together for larger goal