Gold prices to see consolidation in first-half of 2012

In the first-half of 2012, gold prices are expected to witness consolidation as a sharp upside will be restricted on account of the ongoing economic uncertainty. The year may give an opportunity to investors and households to increase their investments in gold.

The year 2012 may give an opportunity to investors and households to increase their investments in gold at a relatively low level of Rs 25,000-25,500 for 10 gm. Those who have missed the bus earlier could wait for this opportunity before June.

Click here to Enlarge
"We suggest investors to buy gold, even in bulk, at Rs 25,000-25,500 per 10 gm during 2012, when the price of the precious metal consolidates in the first half. At this level, it would not have much of a downside risk, but would have high probability of going up," said Naveen Mathur, associate director-commodities and currencies of Angel Broking.

In the first-half of 2012, gold prices are expected to witness consolidation as a sharp upside will be restricted on account of the ongoing economic uncertainty.

"However, by the second half of the year prices could witness a bounce back as by then the global economy will receive clarity over the lingering European debt crisis and an improving US economy, thus helping investors allocate investments with 'caution' taking a back seat," Mathur added.

Gold has marked its eleventh annual consecutive rise this year, despite falling sharply from its all-time high of $1,920/oz. It has gained 12 per cent in the dollar-denominated international markets, which dictate gold prices across the world, including India, from the opening level of $1,420.8 per troy ounce (31.1034 gm). It was trading at $1,606 per troy ounce when the market broke for year-end holidays last week. 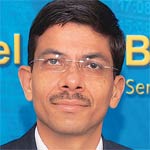 We suggest investors to buy gold,even in bulk,between Rs 25,000 and Rs 25,500 per 10 gmin 2012, when its price consolidates in the first half: Naveen Mathur
In the domestic market, gold gained a whopping 32 per cent during 2011, mainly on account of depreciation of the rupee by over 16 per cent. Since July 27, when the rupee touched a high of Rs 43.85 against the dollar, it slid over 20 per cent to Rs 52.71 on Monday.
Nitin Nachnani, analyst at Geojit Comtrade, said, "Gold is expected to touch as low of Rs 25,500 on the Multi-Commodity Exchange (MCX) in the next two quarters. Long term investors should buy at that level."

"Fund houses were forced to book profits in gold in recent weeks. They were trying to show profits, by offsetting the losses they have suffered in equity markets. Otherwise gold should have gained in the wake of persistent global uncertainties," Nachnani added. 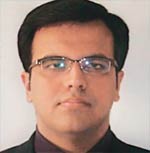 Fund houses were forced to book profits in gold in recent weeks. They were trying to show profits by offsetting the losses they have suffered in equity mkts: Nitin Nachnani
The yellow metal is not finding many takers in the physical form at these high levels, if one were to go by the World Gold Council (WGC) data. Demand for gold jewellery has slumped by about 10 per cent in the first three quarters of 2011 to 465.6 tonnes, which is five per cent below the December quarter demand in 2008 (the quarter marked by the collapse of Lehman Brothers). However, investment demand for the metal was up 33 per cent in the quarter ended September to 468.1 tonnes.

Exchange traded funds (ETFs) are the most popular form of investment in gold in the world. Rupee is expected to depreciate and hover around Rs 54 per dollar-mark in a few weeks. "But there is a possibility of the rupee breaching this level and moving to Rs 60 per dollar if the global economic conditions worsen and dollar gains further prominence," said a currency analyst, who wished not to be named.