Gold, silver sales down by up to 40% this Dhanteras 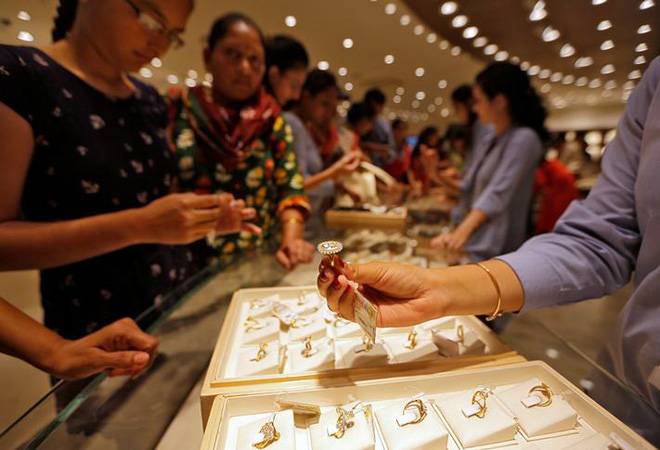 Mirroring slowdown in the economy, pre-Diwali Dhanteras sale of gold and silver dipped by as much as 40 per cent as high prices and lower consumer spending hit demand. Dhanteras, considered the most auspicious day in Hindu calendar for buying items ranging from precious metals to utensils, was a muted affair in most markets across the country with traders complaining of lesser footfall and reduced consumer spending.

"As per an estimate, there was a decline of business from 35 to 40 per cent which is a cause of major worry for the traders," CAIT's Gold and Jewelery Committee Chairman Pankaj Arora said in a statement.

Sales were down as prices of both gold and silver have sharply increased from over last Dhanteras, which has weakened the demand, he said, adding it was perhaps the "most disappointed Dhanteras" for the traders in past more than 10 years.

Jewellers' apex body All India Gem and Jewellery Domestic Council (GJC) chairman Anantha Padmanaban said, "In volume terms, we expect sales to be 20 per cent less than last year. In terms of value, it will be same as last year because of higher prices."

Most consumers are going for token buying of lesser value and are waiting for price correction for purchase of wedding jewellery, he said. The western region in the country is doing brisk business compared to other regions in the country as Dhanteras is an important festival of there, he added. Delhi's Karol Bagh Jewellery Association President Vijay Khanna said most buyers are restricting their purchase to tokens, especially for investment purpose. "We see flat sales this Dhanteras but hope to recover during the wedding season in the coming days," he added.

Senco Gold and Diamonds Executive Director Suvankar Sen said the sales are expected to remain "muted" this season owing to the surge in the gold prices and current economic slowdown. "As the purchasing power has come down, we can see de-growth in the range of 10-15 per cent in sales quantity. However, in terms of sales valuation, it may remain same as that of last year as the gold prices are high," he said.

Also read: Infographic: Why gold prices are on fire

Kumar Jain of UT Zaveri in Mumbai's Zaveri bazaar said, "The momentum has picked up and there is rush for wedding jewellery bookings. Small ticket size items are doing extremely well."

World Gold Council India Managing Director Somasundaram PR said, "The sharp rise in the gold price and deep discount in the bullion market impacted trade and the consumer outlook in Q3, however, Dhanteras seems to have changed this as had been expected."

Gold refiner MMTC-PAMP India's Managing Director Rajesh Khosla said overall the sentiment was "distinctly subdued" because of high prices of gold. "Gold rates at Rs 39,000 per 10 grams was much too expensive for people. There was shift to silver coins," he said.

However, organised player Kalyan Jewellers Chairman and Managing Director T S Kalyanaraman said, "We are witnessing a positive momentum across our showrooms. It is too early to comment on an overall trend or growth. "We are predicting more traction during the evening hours and even early tomorrow, because this year the gold buying Muhurat is split over two days." he added.

Hazoorilal Legacy MD Rohan Narang said, "Overall, we witnessed a positive rise in sales as compared to usual days. We are optimistic and looking forward to the wedding season to retain the sheen of jewellery sector". City-based Gem Selections Managing Director and Founder Pankaj Khanna said there was huge increase in silver sale in comparison to gold. "We sold over 130 kg of silver during Dhanteras as compared to 23 Kg last year because of the increase in our e-retail, retail footprint and branding," he added.

Bullion dealer Augmont Director Sachin Kothari said the gold sales on its digital platform doubled, while it remained lower by 15 per cent in the physical market. "With gold prices being at an all-time high, digital gold buying medium provides buyers the liberty of buying gold as low as Re 1 and this flexibility is gaining ground," he added.

Gold, silver have delivered up to 22% returns since last Dhanteras

Samvat 2076: All you need to know about Muhurat trading, Chopda puja