We look into the financials of six firms as the final part of the four-story series which covers the constituents of Bharat 22 ETF. The Bharat 22 ETF has been the much talked about fund offering due to the large number of firms which are also the key constituents of the Sensex and Nifty. Due to strong sentiments in the market and its constituents, Bharat 22 ETF received subscriptions worth Rs 31,817 crore of which the government decided to retain Rs 14,500 crore and return the rest to subscribers. We look into the financials of six firms as the final part of the four-story series which covers the constituents of Bharat 22 ETF.

NBCC: The firm is a govt Navratna Enterprise engaged in project management consultancy, real estate development and EPC contracting. It executes civil engineering projects for state governments, various central government ministries and public sector. The company has presence in India and overseas countries like Mauritius, Turkey, Botswana, Maldives, Republic of Oman and Nepal. It has a strong order book of Rs 7,00,00 crore and currently executing 35.28 million square feet of projects in various industries. 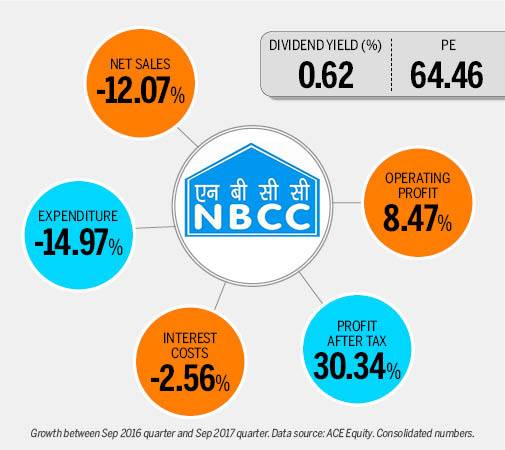 NBCC is also involved in border fencing works at Indo-Bangladesh border and Indo-Pak border to secure India's international borders. The company is also engaged in various CSR activities across the country including execution of Bio-digester Toilets in village schools at various locations, providing scholarships to the poor school children for their education, helping in skill development of workers in various trades etc.  It has workforce of over 1900 employees.

NLC India: It is a navratna govt enterprise engaged in mining of lignite and generation of power through lignite-based thermal power plants. The company is operating four thermal power stations at Neyveli, Tamil Nadu and one Thermal Power Station at Barsingsar, Rajasthan. The total power generation during the financial year 2016-17, was the highest ever since inception registering a growth of 9.65% over the previous year 2015-16. The average plant load factor (PLF) of the thermal power plants of the company as a whole during the year 2016-17 was 73.73% against the national average of 59.88% With external credit rating of AAA+, NLC is able to raise funds at the lowest possible rates. The company is also engaged in several CSR activities such as providing drinking water at bus stands,  railway stations and augmenting water resources for the benefit of 200 villages.

National Aluminium Company: A central public sector undertaking under the Ministry of Mines with integrated and diversified operations in mining, metal and power.  The company has  68.25 lakh TPA Bauxite Mine & 21.00 lakh TPA (normative capacity) Alumina Refinery located at Damanjodi in Koraput district of Odisha, and 4.60 lakh TPA Aluminium Smelter & 1200MW Captive Power Plant located at Angul, Odisha. Apart from BSE & NSE, the company is listed on London Metal Exchange since 1989. National Aluminium is engaged in R&D activities fervently and has already filed 31 patents out of which 9 patents have been granted and 5 have been commercialized. It plays a significant role in the socio-economic development of the areas where it operates. Some of the socio-economic programs it undertakes includes rehabilitation of displaced families, employment, income generation, health care and sanitation of local people, education skill development, providing safe drinking water, development of infrastructure, pollution control, environmental measures, rural development, promotion of arts, crafts and culture. The bank offers services, which include premium services, insurance services and e-payment of indirect taxes. It has approximately 70 specialized branches across the country.

The bank offers a wide range of services including a foreign currency banking unit at Colombo and specialized overseas branches at Chennai, Bangalore, and Mumbai exclusively for handling foreign exchange transactions arising out of export, import, remittances and non-resident Indian business. SJVN Ltd is primarily engaged in the business of generation and sale of power. The company operates through the thermal power segment. It is implementing power projects in Himachal Pradesh, Uttarakhand, Bihar, Gujarat, Rajasthan and Arunachal Pradesh in India besides operations in neighbouring countries, which include Nepal and Bhutan.