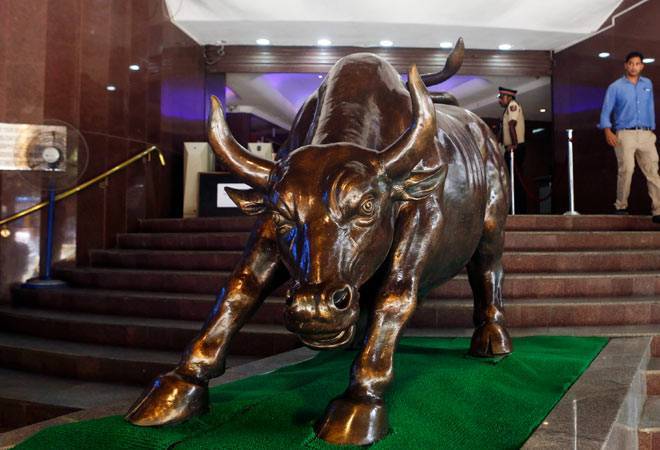 Benchmark indices Sensex and Nifty closed marginally short of their all-time highs. While Sensex is just 135 points short of  its all time high, Nifty needs just 28 points to touch its record high of 11,856.

Analysts believe the market will cheer the prospect of a stable government at the centre. Also, the possibility of the BJP returning with absolute majority can lift the spirit further.

All the sectors closed in the green, pressured by gains in PSU Bank at 7.78 per cent, Realty at 5.72 per cent, followed by Pvt Bank, Metal, Auto and Financial Services.

2:00pm: India Vix, a volatility figure that is calculated which indicates the expected market volatility over the next 30 calendar days, has lowered doen to 23.32 Monday against the previous close of 28. Inida Vix value was standing at 29.32 on May 16, 2019, also the 52-week high.

1:30pm: Total traded value for the Equity segment on NSE stands around Rs 26,119 cr with 12646.25 lakh shares changing hands today and at Rs 2315 cr on BSE, with 1501 lakh shares as the trading volume, as per the lastest data available on the exchange platforms.

1:10pm: The market breadth was tilted in favour of buyers, with 1400 stocks with buying interest on NSE against 151 declining ones and 88 unchnaged stocks. On BSE, 1818 stocks are advacing while 541 stocks are trading in the red and 135 remain unchanged.

12:55pm: Markets to react positively by Motilal Oswal Financial Services, as per their report 'India Politics: Exit polls predict majority for NDA; Prospects of third front diminish; expect positive reaction in markets', "We expect the markets to react positively to the exit polls. We also expect favourable reaction in the Bond and currency markets. Prediction of continuance of stable government with majority/near majority augurs well from reforms and policy agenda perspective, in our view. It removes a key overhang from the market narrative - potential of a hung verdict, formation of a third front government with no major national party at the helm."

"Assuming, no material change in actual results vs. the exit poll predictions, we expect the market's focus to revert to fundamentals post the election and government formation. Progress of monsoon, trends in rural consumption and events in debt market will be key near-term monitorables, in our view."

12: 20 pm: Views on Exit polls' and market reaction according to Mr Ajay Bodke, CEO at Prabhudas Lilladher,"Any indication of BJP alone getting a majority can lead to a sharp upsurge in equity markets and strengthening of Rupee. As markets have already discounted an NDA victory such an outcome will lead to markets trading sideways with focus on the onerous quid-pro-quo in terms of plum ministries (especially economic & resources) that could be demanded by BJP's allies."

The company also announced that the board has decided to raise fund by issue of secured/redeemable NCD in one of more series/tranches on private placement basis for an amount upto Rs 500 cr.

11:40am: All the indices are extending gains. Highest gain is observed in Capital Goods at 4.48 per cent, followed by BSE Realty, up 4.30 per cent, industrials at up 4.29 per cent gain. Oil and Gas and Energy both stood at 4 per cent hike, followed by Basic Materials, Metal and power indices.

The lowest gains are observed in BSE IT, TECK and Healthcare, both gaining between 0.20 to 0.40 per cent.

11:20am: Indiabulls Housing rises over 7 per cent. The housing finance giant has announced to the exchanges that the company has made timely payment of interest / principal (as the case may be) in respect of the following NCDs issued by our Company, on private placement basis on 17 May, after market hours.

10: 55am: Welspun Enterprises rises 13.87 per cent. Following the news that the company received provisional completion certificate for commencing commercial operation of the Dewas Industrial Water Supply Project (finished ahead of the scheduled completion date), the stock rose 13.87 per cent to Rs 118.60 to day's high.

Shares of Jubilant Life Sciences tumbled nearly 6 per cent in early trade after it reported a net loss of Rs 100.65 crore in the fourth quarter ended March 31, 2019, dented by one time loan settlement with International Finance Corporation (IFC). Revenue was up 5.9% at Rs 2,385.6 core as compared to Rs 2,274.87 crore last year.

Shares of Tata Power Company rallied 10 per cent in early trade on Monday. Last week, the power utility has signed a Memorandum of Understanding (MoU) with Mahanagar Gas Limited (MGL) to foray into emerging e-mobility business.

Shares of Adani Enterprises rallied 11 per cent in early trade on Monday in line with benchmark indices after a majority of exit polls for Lok Sabha election 2019 indicated the National Democratic Alliance (NDA) is coming back to power.

9:40am: All sectoral indices trade in green

On the sectoral front, all the indices were trading in green, while realty and capital goods stocks were among top gainers on the BSE, rising as much as 3.96 per cent and 3.82 per cent, respectively.

9:35am: Cipla shares up 2.5% after USFDA issues no observations

Shares of Cipla gained 2.5 percent in the early deals on Monday after USFDA issued zero observations for its Indore facility.

9:30am: Indian benchmarks surged nearly 2 per cent in opening deals today as investors were boosted by the prospect of a stable government at the centre. Also, the possibility of the BJP returning with absolute majority can lift the spirit further. As per India Today-Axis My India Exit Poll, the Bharatiya Janata Party (BJP)-led NDA will win around 339-365 seats, while the Congress party will be reduced to 77-108 seats.

Oil prices surged 1% on Monday after Saudi Energy Minister Khalid al-Falih said that oil producing countries have agreed to continue limiting supplies, Reuters reported. Brent crude futures stood at USD 72.98 a barrel around 5:30 am, up 1.1 per cent, against the previous close.

9:20am: Rupee opens higher against dollar

The Indian rupee opened higher by 73 paise at 69.49 per dollar on Monday against previous close 70.22, tracking positive cues from equity market.

Positive trends on SGX Nifty indicate a strong opening for the benchmark indices in India. The SGX Nifty Index Futures for May delivery were trading at 11,679, up by 244.50 or 2.14 per cent, at 9:52 AM, Singapore Time.