TCS has come a long way since the stock was listed at a 27% premium to its issue price of Rs 850 on August 25, 2004. The stock has given 318% returns to the investors since its listing date fourteen years ago. In the last 10 years, however, the stock has delivered over 600% returns to its shareholders. We look at various key levels the stock scaled to hit a record Rs 6.80 lakh crore mark in market action today.

The initial public offer (IPO) opened on July 29, 2004 and closed on August 5, 2004. 55,452,600 equity shares of Rs 1 each (face value) were put on sale during the IPO. In addition, the green shoe option offered 83 lakh shares. A greenshoe option allows the underwriter the right to sell or purchase more shares than originally planned during the first 30 days' time window immediately after listing.

Under this, the underwriter buys or sell equity shares from the market if share price falls the below issue price or goes significantly above the issue price. The above option acts as a price stabilising mechanism.

On listing, the market capitalisation of stock stood at Rs 47,232 crore. Since then, the stock has gained over Rs 6,79,332 crore in market cap- the highest among all Indian listed companies.

In 2005, the firm's market capitalisation crossed $10 billion mark. It became the first Indian firm in the IT space to cross $2 billion in revenue and half a billion dollar in net profit as per US GAAP in 2004-2005.

In July 2013, the market capitalisation of the firm rose to $50 billion.

The company added $25-billion in market value to reach $75 billion in an year.

On April 20, 2018, TCS came close to the $100 billion-mark after company reported better-than-anticipated earnings.

And today, the stock hit its all-time high of 3,557 level on BSE becoming the first Indian firm to enter the $100 billion market capitalisation club.  The phenomenal rise of the stock can be attributed to weak rupee and robust Q4 earnings. 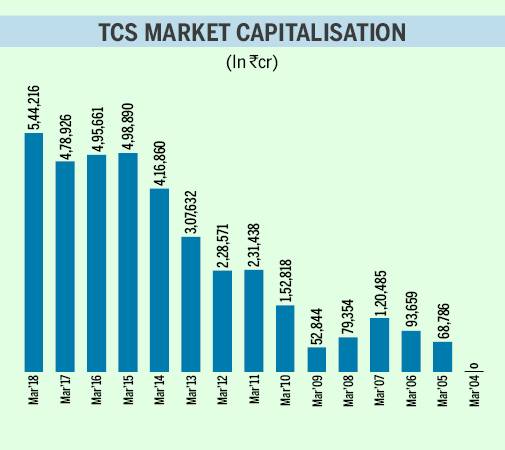 The stock is the top gainer on Sensex and Nifty in trade today.

TCS shares have risen 26 percent so far this year, compared with Infosys that has gained 13 percent.

Why Bharti Airtel stock is the top Sensex, Nifty gainer even as Q4 net profit fell 78%