Major US stock indexes closed mixed on Thursday, with Nasdaq Composite down 0.49 per cent as Apple shares skidded to a two-year low on concerns about iPhone demand. 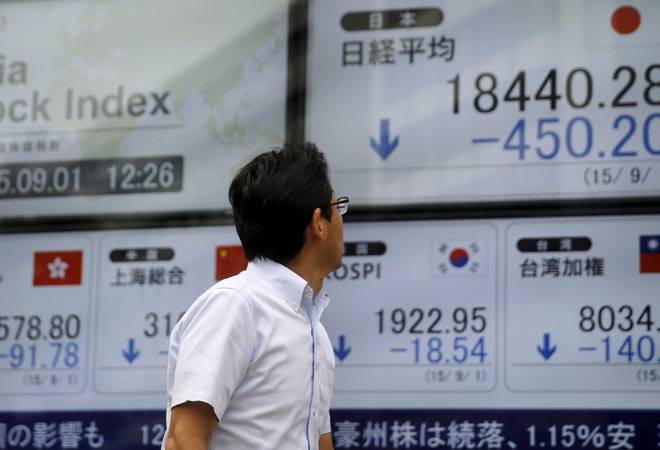 Asian shares got off on the back foot on Friday, while the yen nursed losses as traders wagered the Bank of Japan will add to its massive stimulus before too long.

MSCI's broadest index of Asia-Pacific shares outside Japan was down 0.3 per cent in early trade, on track for a weekly loss of 0.4 per cent.

Major US stock indexes closed mixed on Thursday, with Nasdaq Composite down 0.49 per cent as Apple shares skidded to a two-year low on concerns about iPhone demand.

Japan's Nikkei .N225 turned lower 0.2 per cent in early trading, after a brief spike at the open.

"Weaker yen and the quick rescue of Mitsubishi Motors by Nissan are both good news for the Japan market. This may relieve downward pressure on the Nikkei, despite Nasdaq's slide yesterday," said Hiroki Allen, chief representative of Superfund Securities Japan in Tokyo.

Shares of Nissan Motor Co (7201.T) and Mitsubishi Motors Corp (7211.T) both rose on Friday, after Nissan agreed to buy a 34 per cent stake in its smaller, scandal-hit rival on Thursday.

The yen has weakened in most recent sessions as investors pared back long positions and Japanese officials explicitly warned about currency intervention.

Also undermining the yen, a prominent academic with close ties to BOJ Governor Haruhiko Kuroda said on Thursday that the Bank of Japan is likely to expand monetary stimulus either in June or July with an eye on first-quarter gross domestic product data and the outcome of this month's G7 summit.

Higher US Treasury yields also underpinned the greenback, after a pair of Fed officials said on Thursday that the US central bank remains on track to hike interest rates this year, though they didn't offer clues on the timeline for tightening policy.

Cleveland Fed President Loretta Mester, who has been less cautious about future rate increases than many of her colleagues, said that inflation measures have moved higher. She said even though there is uncertainty in the Fed's economic forecasting, that should not stop the central bank from making monetary policy decisions.

Boston Fed President Eric Rosengren, a voting member this year on the Fed's rate-setting committee, said the Fed should raise rates again if second-quarter data confirms that the US labour market is near full strength and inflation is on track to accelerate.

Later on Friday, investors await a fresh set of US economic readings, including retail sales data and the April producer price index. ECONUS

China will also release a spate of economic data over the weekend.

Crude oil futures slipped after rising 1 per cent in the previous session in volatile trading, as investors weighed a forecast for tighter global supplies and concerns about a major outage in Nigerian crude against signs of another storage build at the hub for US crude futures.