Wall Street staged a furious rally in the waning moments of the session on Friday after U.S. President Donald Trump declared a national emergency 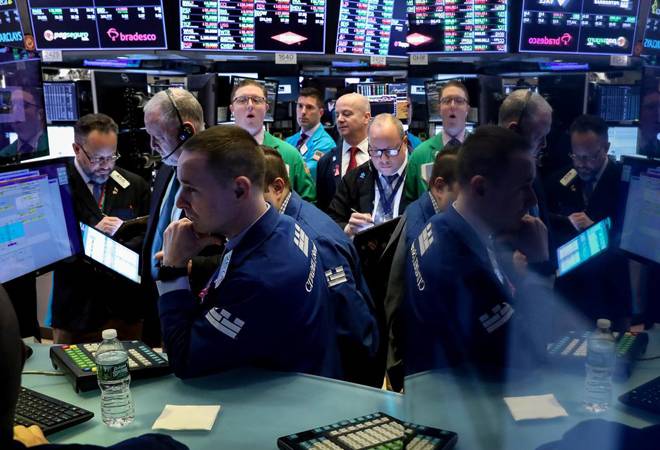 Wall Street staged a furious rally in the waning moments of the session on Friday after U.S. President Donald Trump declared a national emergency to combat the rapidly spreading coronavirus, although major averages still suffered sharp losses for the week.

In a volatile session, all three main indexes jumped more than 6% in early trading before paring to a gain of as little as 0.55% on the S&P 500 before rallying towards the close as Trump made the announcement with industry leaders of about $50 billion in federal aid to fight the disease.

"The initial take, he started talking about $50 billion, the market asked 'where is that going?'" said Peter Jankovskis, co-chief investment officer at OakBrook Investments LLC in Lisle, Illinois.

"But as he's been bringing these various leaders to the front and they have been talking about what they are doing, that is really what the market is responding to."

The indexes were still about 20% below record highs hit in mid-February, and each saw declines of at least 8% for the week. Since hitting the highs, markets have been besieged with big swings in the market, nearly matching as many days with declines of at least 1% as all of 2019. Friday's surge was the biggest one-day percentage gain for the S&P 500 since Oct 28, 2008.

The Democratic-led U.S. House of Representatives will pass a coronavirus economic aid package on Friday, House Speaker Nancy Pelosi said, but it was unclear whether Trump and his fellow Republicans would support it.

All the main S&P 500 sub-indexes were trading higher, with financial stocks rising 13.23% as expectations of further liquidity measures by the Federal Reserve pushed up Treasury yields, in what has become a very thin market.

Oil also looked set to end the week with a silver lining, as both Brent and WTI crude settled higher after a near-collapse in prices on Monday due to a price war between Saudi Arabia and Russia. The S&P 500 energy index added 8.84%.

Travel stocks, hammered in the rout, were trading higher, with the S&P 1500 airlines index up 11.58%

Boeing Co jumped 9.92% but suffered its biggest weekly drop in its history on rising concerns about the company's growing cash burn.

Apple Inc rose 11.98% and was among the top boosts to the benchmark S&P 500 and the blue-chip Dow, as the iPhone maker said it would reopen all 42 of its branded stores in China.

Advancing issues outnumbered declining ones on the NYSE by a 4.73-to-1 ratio; on Nasdaq, a 2.95-to-1 ratio favored advancers.

Volume on U.S. exchanges was 17.10 billion shares, compared to the 13.02 billion average for the full session over the last 20 trading days.

'Kid in Toy Shop' moment on Dalal Street? Not yet, but time to fill up shopping cart