All sectors closed in the red, mirroring the fall in broader markets with over 2% fall registered in IT, PSU banking and financial stocks 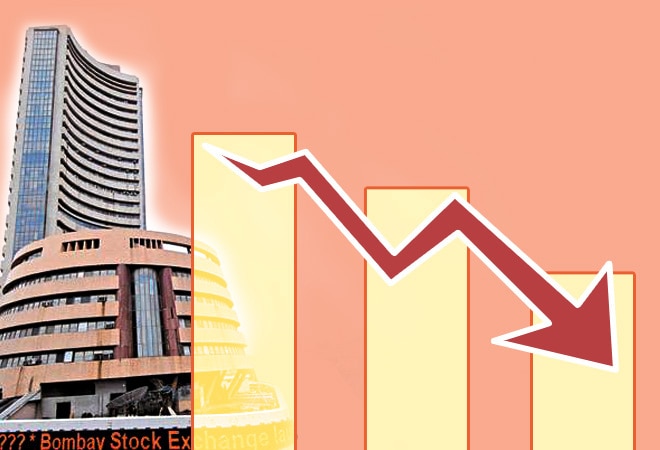 Volatility gauge, India VIX, once again jumped over 4 per cent to close at 24 level

Equity market saw biggest fall in four weeks today as investors booked profits amid a bearish trend in global markets. After a volatile trading session, Sensex ended 549 points lower at 49,034 and Nifty fell 161 points to 14,433. Yesterday, Sensex ended 91 points higher at a record of 49,584 and Nifty gained 30 points to 14,595.

All sectors closed in the red, mirroring the fall in broader markets with over 2% fall registered in IT, PSU banking and financial stocks.

Of  30 Sensex components, Bharti Airtel, ITC, Bajaj Auto and Bajaj Finance were the only stocks that closed in green. On the other hand, UltraTech Cement, followed by Tech Mahindra, ITC, M&M, Maruti, HUL, Infosys, Asian Paints, IndusInd Bank, Dr Reddy's, HCL Tech and TCS were among the top losers today. Volatility gauge, India VIX, once again jumped over 4 per cent to close at 24 level.

Meanwhile, Trump administration in its last days took another swipe at China and its biggest firms on Thursday, imposing sanctions on officials and companies for alleged misdeeds in the South China Sea and imposing an investment ban on nine more firms. Donald Trump also became the first president in US history to be impeached twice when the House voted 232-197 on Wednesday to charge him with inciting riots at the Capitol.

Expresing views on Nifty's technical outlook, Sneha Seth (Derivatives Analyst, Angel Broking) said," We began the week on a cheerful note and saw follow-up buying to extend the up move beyond 14650 mark. Around this levels, we found some parameters like PCR-OI and FIIs Long short Ratio hinting market in the overbought zone. As anticipated, we witnessed decent profit booking at the higher level which led weekly closing below 14450 mark. Must say, market remained volatile last week and hence we saw mixed activity in terms of open interest in index futures segment. The PCR-OI surged to 1.80 on Tuesday, which clearly suggested market was overbought. From the next trading sessions, strong writing was observed in 14600-14700 call options."

She added," Today, we also saw good amount of writing in 14500 strikes. In case of puts, hardly any meaningful build-up was seen during the week. Highest open interest concentration for the coming weekly series, has shifted lower to 14600 call and 14000 put options. The Volatility index surged more than 16% last week, which is certainly not good for bull's. Considering the overall development seen in F&O space, we expect some follow-up selling in the coming week as well. Hence, traders are advised lightening up their longs and prefer buying slightly OTM puts incase of any pullback around  14500-14550."

Nirali Shah, Senior Research Analyst, Samco Securities said," The market is overstretched on the upside, so this can cause a short-term dip or weakness in the near term. Infact, S&P 500 index which has been dictating the trend in global equity indices is now trading negative for the week and other emerging markets such as Taiwan (TAIEX) and South Korea (KOSPI) are also trading with a sideways to mild negative bias. A break below 14430 can trigger a profit-booking move in Nifty. Immediate support and resistance in the short term are now placed at 14430 and 14640 respectively and a break on either side will lead to a directional move in the short term."

She added," Up until the Union Budget, markets are expected to witness unusual hype and hysteria on hopes and expectations from the budget which will drive the volatility even higher. Taking a holistic view, large cap players might not see a significant rise but there could be a lot of buzz in small and midcaps. At current price points, market participants may look for trading bets rather than invest for the long haul. Medium term investment opportunities are still available in pockets like metals, commodities and cyclicals, although they have turned risky. Nifty50 closed the week at 14433.7, up by 0.6%."

On the currency front, Indian rupee, slipped 3 paise to end at 73.07 per dollar today, tracking weakness in equities and strong US currency.