In primary markets, FPIs were excited by the opportunity to obtain large lots of banks at attractive valuations that despite recent bounce from the lows

After pressing the panic button hard in March, foreign portfolio investors (FPIs) are finally back on the driving seats. The FPIs, who withdrew a record Rs 61,973 crore from the Indian equities in March, registered the highest-ever monthly inflows of Rs 47,080 crore in August. They have remained net sellers until July, but with the record infusion in August, the year-to-date net flows have turned positive with cumulative investments of Rs 36,130 crore. They had invested Rs 48,636 crore in the first eight months of 2019. FPI investment trended down in April too with outflows close to Rs 7,000 crore but continued to remain positive since May with net investments of Rs 14,569 crore, Rs 21,832 crore, Rs 7,563 crore and Rs 47,080 crore, respectively in the past four months. 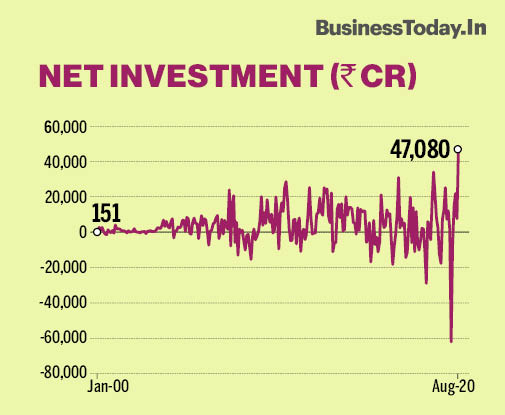 "August has been a great month for FPI flows although major chunk of the inflows went into the primary market - QIP, FPO etc from mainly banks. Hence the impact of such a large buying on secondary markets and benchmark indices has been limited," said Deepak Jasani, Head of Retail Research at HDFC Securities.

In primary markets, FPIs were excited by the opportunity to obtain large lots of banks at attractive valuations that despite recent bounce from the lows. "Global monetary easing policies followed by the central banks, weakening US dollar and the US Fed's new policy framework have all led to more money flowing into the emerging markets, mainly in equities as the debt market situation in emerging markets may still not be comfortable for them," he added.

Meanwhile, the Sensex ended 839 points lower at 38,628 today primarily due to panic selling on fresh round of border tensions with China.

Going by the new US Fed policy framework, the US dollar may not recover in a hurry and cost of money in developed economies may also not go up any time soon. Hence liquidity flow is likely to continue in emerging markets including India. "Strengthening rupee is also a favourable point for Indian equities.  Stocks are seeing expansion in valuations as visibility for earnings improvement is still hazy," pointed out Jasani.