While the nation is all set to celebrate the festival of light (with due precautions) pushing behind the virus fear, we bring you some top Diwali picks by the brokerage HDFC Securities to help you make investments: 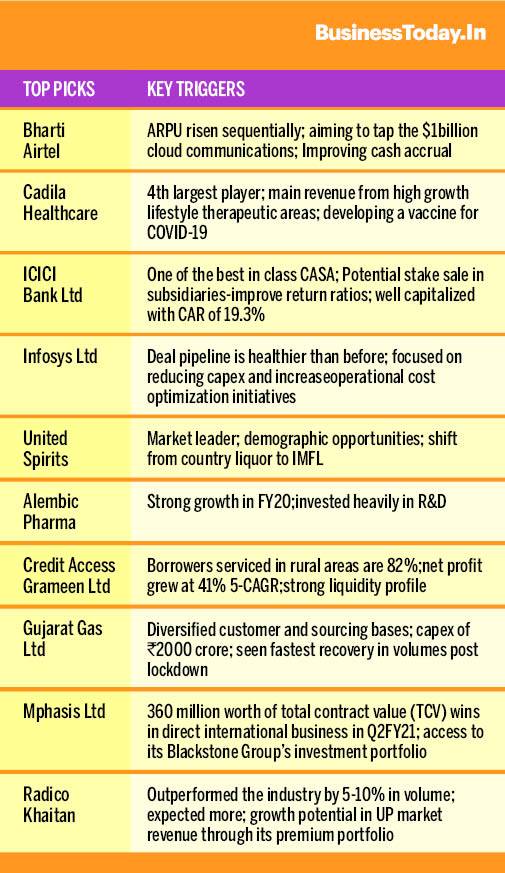 The flagship company of Bharti Enterprises has seen a sequential rise in ARPU (average revenue per user) for the fourth straight quarter, helped by higher data usage and tariff hikes. It aims to tap the $1 billion cloud communications market with the launch of Airtel IQ for enterprises and small medium enterprises. Company has cash and equivalents of over Rs 22,700 crore as on September 30, 2020. Improving cash accrual could sufficiently cover maturing debt of Rs 13,900 crore in FY21.

Fourth largest player with 4.2 per cent market share in Indian pharmaceutical market. It derives major part of domestic revenues from high growth lifestyle therapeutic areas and is expected to sustain strong growth in the domestic revenues on the back of established brands, large and therapeutic-focused field force, in licensing agreements, and product launches. It is also developing a vaccine for COVID-19 and expects results from the trials by March-April-2021. If approved, this could unlock a sizeable growth opportunity

The second largest private sector bank in India in terms of asset size has transformed itself from a corporate focused bank to a retail bank in the last 5 years. Focus towards portfolio quality and strengthening of underwriting credit processes could restore the prudent growth path for the bank and result in better long-term value creation. It has one of the best in class CASA. Moreover, this is also helping the bank in improving margin. Potential stake sale in subsidiaries can help the bank in shoring up return ratios in the medium-term. The bank remains well capitalised with CAR of 19.3 per cent. This will act as a cushion against further asset quality shocks and lower CASA growth if any.

A leading provider of consulting, technology, outsourcing and next-generation digital services has a deal pipeline is healthier than before, though cost-cutting and cash conservation measures by clients have led to delayed conversions. It is focused on reducing capital expenditures and accelerate operational cost optimization initiatives. The company's financial flexibility is strong, supported by robust liquidity in the form of cash and cash equivalent of Rs 26,011 crore as on September 30, 2020.

The second largest spirits company in the world by volume has 15 brands in its portfolio which sell more than a million cases every year, of which two brands sell more than 10 million cases annually. It has more than 100 brands in its portfolio, its top 15 brands contribute more than 80 per cent. Whiskey sales comprise approximately 73 per cent of the value of liquor sold in India in 2019 clearly revealing that premium prices attached to whiskey don't dampen Indian consumer's appreciation of this liquor. It has a fairly large portfolio of mass and mid-priced IMFL brands such as Bagpiper, DSP Black and McDowell which can help in bringing in consumers from these categories and in turn deliver healthy growth in top-line and profitability for the company. Home delivery and premium liquor in malls can be structural changes for the industry and ease in buying can be a key driver for adding consumer base along with higher share of premium segment.

Manufactures branded formulations, international generics and APIs and US business contributed to around 43 per cent of its revenues. It has recorded highest ever revenues and net profit in FY20 as US business recorded robust performance during the year.

The company has continued its robust growth trajectory even in H1FY21. US business grew 54 per cent year-on-year at Rs 1976 crore in FY20 on the back of new launches and continued traction from Sartans. As on Sep-2020, Alembic Pharma has filed 198 products with US FDA and has approvals for 131 ANDAs. The company has spent 13-14 per cent of sales on R&D over the past four years and the trend is expected to continue over FY20-22 as well.

A leading Indian microfinance institution headquartered in Bengaluru, y has experienced many business cycles and has managed to grow at a robust rate. In the last five years, net profit of the company has grown at 41 per cent CAGR. This profitability is anchored by lower than industry average operating expenses and consistently low credit costs. After acquiring Madura Microfinance Ltd in FY20, the company's consolidated gross loan portfolio stood at Rs 11,724 crore as of Q1FY21. The company has strong liquidity profile and adequate capital buffer. Controlling operating expenses is critical in determining the ability to offer loan products at reasonable rates to customers while maintaining profitability for self.

India's largest City Gas Distribution company, benefits from the economies of scale, diversified customer and sourcing bases, and extensive pipeline infrastructure. It received eight GAs (including two transferred from Gujarat State Petronet) 10th CGD bidding round and has envisaged capex of nearly Rs 2000 crore through its internal accruals over the next three years up to FY23 for development of CGD network across both its existing as well as new areas. Tiles manufacturers in Morbi constitute more than 70 per cent of its total industrial volume. Now, easing out of COVID-19 related restrictions helped to increase the demand especially from Morbi region.

Leading IT solutions provider, offering Applications, Business Process Outsourcing (BPO) and Infrastructure services has registered $360 million worth of total contract value wins in direct international business in Q2FY21, of which 73 per cent was in new-generation services. Given the Blackstone Group's parentage, Mphasis has access to its investment portfolio and the company has leveraged the same since its acquisition. Impressive deal wins over the last two to three quarters and a healthy deal pipeline would likely drive good growth in the near term.

Has a brand portfolio across the Indian made Foreign Liquor (IMFL) categories of Whisky, Brandy, Rum and White Spirits. It has consistently outperformed the industry by 5-10 per cent in volume terms since the start of the pandemic. Premiumization has led to a 10.5 per cent volume growth since FY14. UP contributes around 25 per cent to company's revenues. With premiumization the liquor market in the state is expected to grow to Rs 50,000 crore.