The BSE index closed at almost three-week high of 21,193.58, due to firm global cues amid sustained capital inflows. It gained three out of four trading sessions during the week. 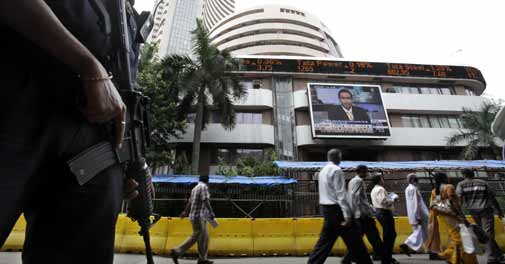 The stock market closed the last week of 2013 with gains and is poised to cross another milestone in the next year, as the benchmark BSE Sensex closed at almost three-week high of 21,193.58, up by 114 points, due to firm global cues amid sustained capital inflows.

The market was closed on December 25 on account of Christmas holiday. It gained three out of four trading sessions during the week.

Buying in realty, consumer durables, capital goods, power, banking and metal counters mainly supported the market to remain upbeat for the second week in a row.

Second-line stocks, too, attracted heavy buying interest, indicating renewed participation of retail investors, and outperformed the Sensex. As a result, the S&P BSE-Smallcap and S&P BSE-Midcap indices closed up by 3.56 per cent and 2.48 per cent, respectively.

The BSE 30-share barometer resumed the week with stability and moved in a tight range of 225 points on alternate bouts of buying and selling as operators preferred to sell long positions and cover their short positions during the week. The derivatives contract expired on December 26.

Jignesh Chaudhary, Head Of Research, Veracity Broking Services, said: "Indian equity markets had a mixed run this week, where initially they had a pretty flat trading session, before ending the week on a positive note."

"With no fresh data available for further cues this week and with the holiday season underway globally, markets witnessed frail trading throughout the week, which was also hampered by the expiry of December 2013 series," he said.

"Markets on the last trading day of the week tracked positive developments in the Global markets which showed great signs of revival following positive data emanating from US markets and ended the week on a positive note. Banks, IT and Midcap sectors witnessed a positive trend this week and FIIs too resorted to some positive buying in the markets. Sensex is going to trade around 20,700 to 21,300 levels and Nifty is going to trade around 6150 to 6400 levels the next week," he added.

IT stocks attracted heavy buying following better US jobless data, indicating recovery in US economy as Indian IT companies received major part of their revenue from US.

On Wall Street, the Dow Jones Industrial Average and S&P 500 indices continued their record breaking spree as incoming economic data reinforced perception that economic recovery will accelerate in the year ahead.