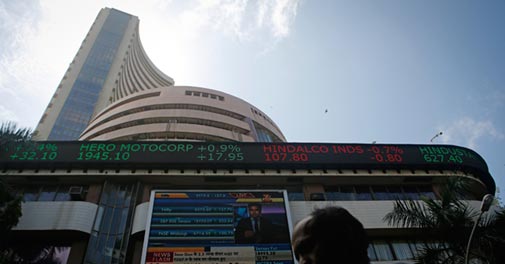 Retreating from one-week high levels, the benchmark Sensex on Monday slid over 42 points to decline for the first time in five days on losses in TCS , HDFC and Bharti Airtel shares as investors booked profits.

The index, which rose over 167 points in previous four sessions, started the day on a positive note but failed to hold onto gains. Selling in IT, banking and metal weighed.

Traders said telecom stocks, including Bharti that shed 2.57 per cent, faced selling after fears of excessive competition came to the fore as the ongoing spectrum auction entered the 43rd round of bidding on seventh day Monday.

Among IT stocks, TCS fell 2.32 per cent but Infosys and Wipro bucked the trend.

The falling trend was cushioned to some extent as realty and oil & gas sector shares rose on valued buying. Midcap and smallcap indices closed in the green, indicating some retail investor interest.

In buzzing large-cap stocks, DLF shot up by the most in two months by surging 2.94 per cent after announcing the sale of its luxury hospitality chain Amanresorts for $358 million. Sun Pharma climbed to a three-month high and Tata Motors gained ahead of its earnings.