If we exclude the promoter holdings from NSE-listed companies and consider only the free-float holding, the FII holdings decreased from 14.3 per cent in quarter ending March 2014 to 13.9 per cent in March 2015. Over a 5-year period since the quarter ending March 2010, FII ownership by percentage increased marginally from 6.38 per cent to 6.44 per cent. In the free-float, FII holdings are up to 13.90 per cent from 13.20 per cent during the same period.

The banking sector in India has the majority of FII holdings. As on March 31, 2015, FIIs hold shares worth Rs 3.44 lakh crore in the sector.

The Indian IT sector is second in the list with exposure to FIIs worth Rs 2.77 lakh crore. The banking sector in India also saw the maximum increase in the value of FIIs from Rs 1.33 lakh crore in March 2014 to Rs 3.44 lakh crore in March 2015. HDFC Ltd. has the highest FII holding amongst other NSE-listed companies with 79.65 per cent its shares held by FIIs. It is followed by 56.18 per cent of FIIs ownership in Tata Motors and 49.98 per cent in Zee Entertainment. 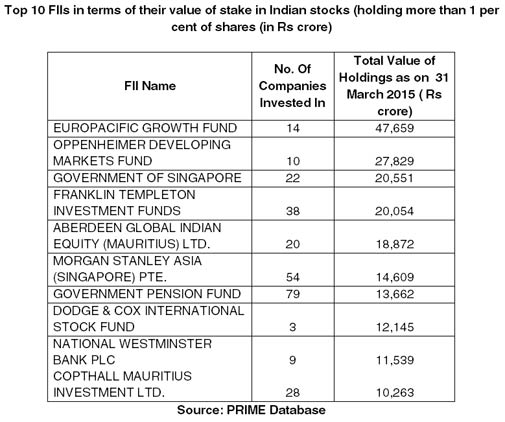 Listed companies are required to disclose the name of the shareholders holding more than 1 per cent of shares in the company. Thus, considering the set of FIIs holding more than 1 per cent in companies listed in NSE, Europacific Growth Fund holds shares worth Rs 47,659 crore through holdings in 14 companies, the highest amongst all FIIs. It is followed by Oppenheimer Developing Markets Funds which holds shares worth Rs 27,829 crore in 10 companies.

mosimageFIIs (holding more than 1 per cent of shares in a listed company) are worth Rs 4.85 lakh crore, which represents only 25 per cent of the overall FII holding of Rs 19.32 lakh crore in NSE-listed companies. In terms of numbers, a total of 465 FIIs (ones holding greater than 1 per cent) are invested into Indian equities across all NSE-listed companies. In terms of the geographical spread the US leads the pack with 35 per cent of total FII holdings, followed by Mauritius (16 per cent), Singapore (15 per cent) and the UK (10 per cent).