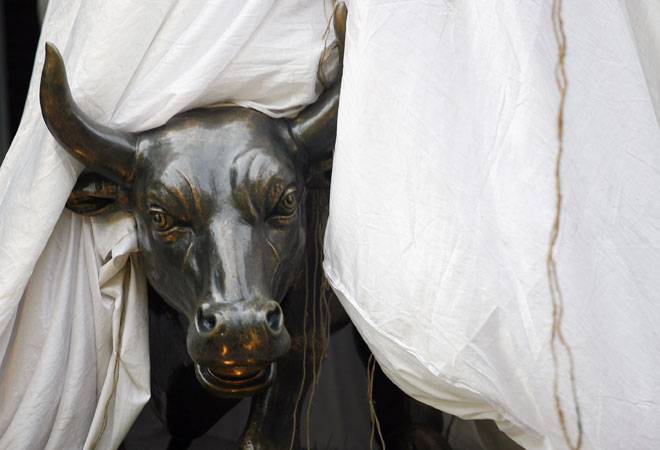 The S&P BSE Sensex jumped as much as 636.52 points higher in intraday trade on Monday, while broader CNX Nifty reclaimed its key 7,150-mark.

The benchmark indices logged their biggest daily gain in more than a year as rallies in global markets boosted risk appetite and sent stocks of recently battered lenders such as State Bank of India (SBI) sharply higher.

Market breadth turned fairly positive with 27 of the 30 Sensex components ending the day in green.

Below are the key factors that may have revived sentiment on the Dalal Street:

Shares of public sector banks such as Bank of Baroda, State Bank of India (SBI) and Punjab National Bank (PNB) spurted up to 25 per cent after Finanace Minister Arun Jaitley on Sunday hinted at more banking reforms.

Nifty PSU Bank index rallied as much as 9.57 per cent led by gains in Bank of Baroda stock, which hit an intraday high of Rs 142.10, up 24.89 per cent on the National Stock Exchange (NSE).

Jaitley said there are a series of banking reforms which he is likely to announce in the days, adding the country is not at a stage where the government can completely exit its holding in the 27 state-run banks.

RBI Governor Raghuram Rajan had also soothed the nerves of the banks on Friday by saying there won't be a repeat of the asset quality review (AQR) that has hit the banks' bottomlines.

Wholesale prices fell for a 15th straight month in January, declining an annual 0.90 per cent, driven down by tumbling oil prices, government data showed on Monday.

The pace of fall, however, was slower than a 0.15 per cent annual decline forecast by economists in a Reuters poll. In December, the index fell a provisional 0.73 per cent.

PBoC Governor Zhou Xiaochuan, in an interview, said there was no basis for the yuan to keep falling, and China would keep it stable versus a basket of currencies while allowing greater volatility against the US dollar. He also said speculators should not be allowed to dominate market sentiment regarding China's foreign exchange reserves and it was quite normal for reserves to fall as well as rise.

The latest data showed Japan's economy contracted 1.4 per cent on an annualized basis in the final quarter of last year because of weak consumer demand and slower exports.

This may be a setback for Prime Minister Shinzo Abe's economic revival program, which aims to stoke inflation through massive monetary easing, but analysts believe this will the government more reason to open the stimulus taps wider to restore growth.

Japan's Nikkei surged over 7 per cent on the stimulus hopes.

Marketmen believes the sharp fall of over 1600 points in Sensex and and a 6.8 per cent plunge in the Nifty over the past five trading sessions was overdone.

Markets were in a bit of an oversold territory so it's a pullback that we are seeing today," said Alex Mathews, head of research at Geojit BNP Paribas to Reuters.

Mathews added that markets will largely be driven by global cues and the upcoming Budget on February 29.

Sensex logs biggest gain in more than a year