Market-capitalisation (m-cap) of all the listed companies stood at Rs 89,31,898 crore. At the closing rate 59.17 for USD-rupee pair, the market value stands at $1.5 trillion. 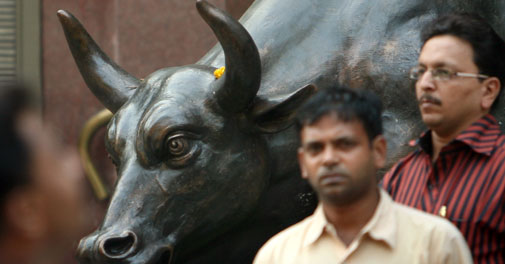 Indian stock market investors are laughing all the way to the bank with the total market value of domestic listed companies soaring to a record $1.5 trillion on a day when the benchmark BSE Sensex ended at a new closing high of 25,396.46.

Market-capitalisation (m-cap) of all the listed companies stood at Rs 89,31,898 crore. At the closing rate 59.17 for USD-rupee pair, the market value stands at $1.5 trillion.

The rupee appreciated 16 paise, logging its biggest daily rise in a fortnight, to end at 59.17 against the US dollar.

Indian equities started a dream run in the run-up to Lok Sabha election results on May 16. From 22,000 levels in early May, Sensex crossed the 25,000 mark after the Narendra Modi-led government assumed charge, with a historic mandate after three decades of coalition politics.

The stable government has raised hopes of a quick economic revival buoyed by continuing reform initiatives cutting across sectors.

India had first entered the trillion-dollar club in June 2007, but moved out in September 2008, amid the global slowdown. It again got back into the elite league in May 2009 and had largely remained there since then, except for some brief periods including once in 2012.

With Sensex at 25,000 level, investors should tread cautiously