In what started as a massive market rally, Sensex and Nifty saw lifetime highs in trade today only to reverse gains to trade flat as the market inched towards the closing bell. 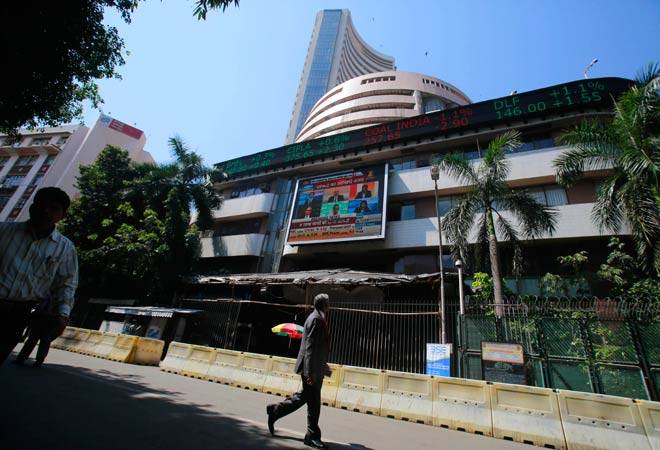 In what started as a massive market rally, Sensex and Nifty saw lifetime highs in trade today only to reverse gains to trade flat as the market inched towards the closing bell.

The Indian benhmark indices settled the day flat, a surprise reversal from its strong rally.

Airtel showcased a strong uptrend through the day but fell to become the second biggest laggard on the BSE 30, tracking 2.21 per cent lower.

Hero MotoCorp and Bajaj Auto were the top gainers, logging 4.23 per cent and 3.12 per cent respectively.

Hindalco gained over 4 per cent after its subsidiary Novelis announced 46 per cent jump in net income at $73 million during the fourth quarter ended March 2017.

The scrip is currently trading 3.61 per cent higher on the NSE.

HCL Technologies reversed gains after climbing 2 per cent on a 12.3 per cent rise in its Q4 net profit at Rs 2,325 crore.

The scrip was down 0.27 per cent on the BSE Sensex.

Bajaj Auto and Hero MotoCorp were BSE 30 top gainers adding 2.05 per cent and 1.73 per cent respectively.

Bharti Airtel fell the most, losing 1.45 per cent.

On the NSE index, Zee Ltd and Hindalco were sectoral gainers while Airtel and GAIL were laggards.

The BSE Sensex continued with its record setting spree to quote at an all-time high of 30,346.69 while the NSE Nifty scaled a new peak of 9,450.65 in opening trade on Thursday on sustained fund inflows, largely driven by forecast of a normal monsoon, amid positive Asian cues.

The gauge had touched an intra-day high of 9,414.75 in yesterday's trade. Major contributors to the key indices were Tata Steel, M&M, Lupin, ONGC, Cipla, Axis Bank, ITC Ltd, ICICI Bank, Sun Pharma, Adani Ports and SBI, gaining by up to 1.42 per cent.

Bucking the trend, shares of India's largest two-wheeler maker Hero MotoCorp fell 0.38 per cent, to Rs 3,309.90 after the company yesterday registered a 13.86 per cent decline in net profit at Rs 717.75 crore for the fourth quarter ended March 2017.

Brokers said that continued buying by foreign funds as well as retail investors after forecast of a normal monsoon this year lifted the key indices to new highs. In the Asian region, Hong Kong's Hang Seng rose 0.23 per cent, while Japan's Nikkei was up 0.15 per cent in early trade.

Shanghai Composite Index, however, was down 0.25 per cent. The US Dow Jones Industrial Average closed 0.16 per cent lower in yesterday's trade.