The Sensex rose 91 points to 33,679 level and Nifty was up 40 points to 10,389 level with mid cap and small cap stocks lending support to the indices. The rise in the Indian indices came even as many Federal Reserve policymakers expect that interest rates will have to be raised in the "near term." On the BSE, TV18 Broadcast Ltd (9.65 percent), GMR Infrastructure (9.41 percent), Future Retail (8.71 percent) and Sintex 6.28 percent were top gainers. Market breadth was positive with 1,513 stocks closing higher against 1224 falling on the BSE. 157 stocks remained unchanged. Infosys (1.87 percent), Bajaj Auto (1.07percent), and Mahindra and Mahindra 1.05 percent pushed the Sensex higher. The FIIs and DIIs were net buyers of the stocks worth Rs 73.22 crore and Rs 222.21 crore, respectively on Thursday. Here are the key highlights, which affected the market today. 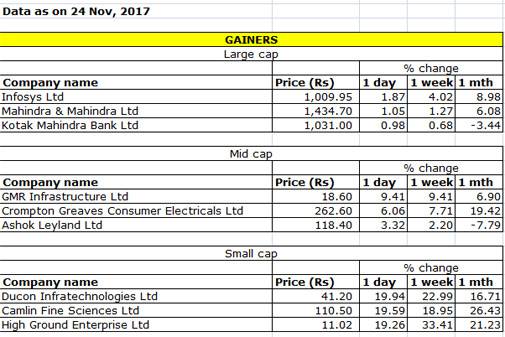 2:15 pm: There is a knee-jerk reaction in the market because of the S&P expectation...there could be a bump of 200-300 points, but the markets will consolidate again. However, these upgrades could see new foreign investments coming in, says Guarang Shah, head investment strategist at Geojit Financial Services.

2:00 pm: IT stocks were the underperformers when the indexes rallied earlier this month, but better-than-expected quarterly numbers and the ability to scale up operations by launching high margin products will bring traction in this sector, says Guarang Shah, head investment strategist at Geojit Financial Services.

1:45: Manali Petrochemicals gets shareholders' nod to raise up to $50 million via issue of securities.

1:07 PM: Reliance Industries has completed sale of its interest in one of the three shale gas assets in the US to BKV Chelsea for $126 million. Reliance Marcellus II, LLC, a subsidiary of Reliance Holding USA and RIL, closed the sale of its stake in the Marcellus shale gas asset operated by Carrizo Oil and Gas, the company said. The Reliance Industries stock IS trading 0.58 percent or 5 points higher at 950 level on the BSE. 1:03 pm: Mahindra and Mahindra says the company and Uber joined have hands to deploy electric vehicles in India.

11:50 am: The Cabinet Committee on Parliamentary Affairs (CCPA) recommended that the Winter Session of Parliament be held from 15 December to 5 January. The CCPA headed by home minister Rajnath Singh met in Delhi to decide on the dates of the Winter Session.

10:46 am: The Bata India stock was trading over 2 percent lower at 731.45 on the BSE after brokerage Motilal Oswal downgraded the stock to 'sell'.

10:28 am: Market regulator Sebi has asked Real Tulip India and its directors to refund the money that the company had collected illegally from the public and has also barred them from the markets for at least four years. The Securities and Exchange Board of India (Sebi) noted that Real Tulip had collected over Rs 1 crore through the issuance of non-convertible debentures (NCDs) from over 400 investors in 2011-2012, 2012-2013, the regulator said in an order.
10: 23 am: In a major boost to the asset reconstruction companies (ARCs) the Reserve Bank has relaxed norms capping their shareholdings at 26 per cent in the borrower firm under reconstruction, provided their net-owned funds are maintained at Rs 100 crore. Earlier ARCs could convert a portion of the debt into equity of the borrower company to the extent of 26 per cent of the revamped equity capital.

9: 45 am: Mid caps and small caps leading the gains on broader indices.

9:30 am: The rupee is trading at 64.66 versus the dollar in early trade, lower than its previous close of 64.58. Yesterday, the rupee staged a robust rebound and ended at a fresh three-week high of 64.58 a dollar, surging by a whopping 34 paise. So far this year, the rupee has gained 5%.

9: 20 am: JP Associates, Praj Industries, Suzlon Energy, Reliance Communications and Vijaya Bank are among the top traded shares by volume on the NSE.

Gains in RIL, ITC, Infosys, Bajaj Auto and Tata Motors are lifting the Nifty, which is trading more than 20 points, or 0.22 percent, higher at 10,371 points.

9: 17 am: Asian markets are trading mostly lower except China which is attempting to bounce back after the previous weak session. In Europe, markets closed mixed on Thursday as the euro zone flash composite PMI came in higher than expectations at 57.5 in November while individual corporate news weighed. US Markets were closed on account of Thanksgiving holiday and will have a shortened trading day today.