Earlier in the day, the Sensex and Nifty suffered a BJP defeat scare during early counting in election results but managed to recover lost ground after PM Narendra Modi-led ruling party made a comeback against Congress in Himachal Pradesh and Gujarat election results.

In contrast to the exit polls where BJP was seen forming a majority government in Gujarat, Congress was winning at 82 seats against 96 seats falling on side of Prime Minister Narendra Modi led-BJP in  Gujarat. But later the tally showed of 182 assembly seats in Gujarat,  BJP was leading on 99 seats with Congress falling behind at 80 seats. In Himachal Pradesh, of 68 Assembly seats, BJP was leading on 43 seats against 21 falling in Congress' favour.

Here are the key highlights, which affected the market today.

3:45 pm: Auto and metal  stocks led the recovery on BSE with their respective indexes rising 309 points and 254 points,  respectively.

3: 30 pm: All 17 BSE sectoral indexes except realty and energy closed in the green. 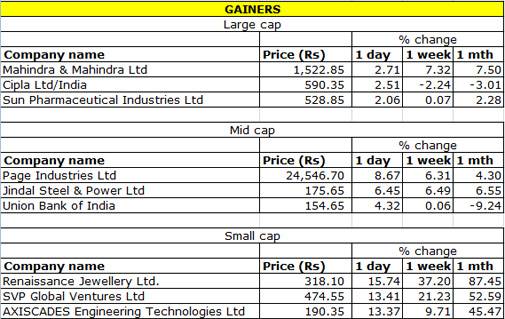 1:00 pm: Foreign portfolio investors (FPIs) have exhausted 99% of their investment limit of Rs 1.9 lakh crore in central government bonds, but when it comes to state government bonds, the share is less than 17% of the permissible limit of Rs.30,000 crore, as of December 14.

12: 30 pm: The RBI says that "the slowing in growth could be over". It added that "structural changes that come with temporary disruptions can be growth-and-efficiency-augmenting in the medium to long term" and introduction of GST could impart a permanent upward push to growth through better tax compliance.

11: 35 am: M&M, Ashok Leyland, Motherson Sumi and Maruti were the top gainers on the BSE auto index.

11:32 am: "This election in Gujarat is like a barometer gauge," said Christopher Wong, an FX strategist with Malayan Banking. "Fears of an upset election dissipated as Modi was set for a win"

11:30 am: PNB, SBI and Bank of Baroda were the top gainers on the BSE Bankex.

11:25 AM: "The verdict of Himachal and Gujarat state election will be the key trigger for the market this week. The cues from winter session (of Parliament) will also be closely followed. "Any deviation from exit polls could negatively impact the market sentiment in the near to medium term. Post election results, market will also look towards global cues and US tax reforms," said Vinod Nair, Head of Research, Geojit Financial Services.

10:10 AM: Market would initially rejoice the victory when results are finally out by Monday but soon correction would resume. Only for a week the market will be active after which year end holiday mood will grip the whole world. The Parliament session will have some fireworks which the market will be watching. "The mood of the market will remain buoyant and stock specific movement will dominate the week but in general the wait and watch phase will continue," opined Jimeet Modi, CEO, Samco Securities.

9: 33 am: Adani Enterprises slumps over 9 percent in morning trade.

9:20 am: In Asia, markets rose as investors expected that a plan to reduce corporate taxes in US would be passed soon.European markets closed lower as leaders agreed to start the second phase of brexit talks and on US developments.

Also H&M came out with below expected sales growth.US markets closed at record high as expectations of Republicans passing the tax bill increased. The lawmakers are expected to vote on this bill next week. The new proposed tax plan is expected to cut the corporate tax rate to 21% from 35%.