The expectation of rate hike by US Fed in coming months, coupled with weak earnings growth in the previous quarter (October-December) ensured that bears remained heavy on domestic equity market this week.

"Domestic equities further weakened on concerns regarding passage of pending bills in the parliament's upper house. Weak earnings growth in the previous quarter and a budget that focused on long-term structural issues meant that there were no immediate triggers to take the equity market higher. Aggressive rate cuts from the Reserve Bank of India (RBI) can revive that sentiment," he adds. 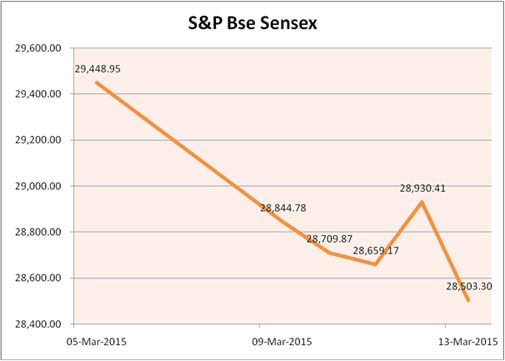 During the week, foreign institutional investors remained net buyers in the capital market as their net investment stood at Rs 2,277.09 crore during March 9 and March 13.

Nikhil Kamath, director, Zerodha, an online brokerage firm, believes the passage of Insurance Bill will be a positive for the market. "This will allow higher foreign equity participation in Indian insurance companies and could considerably help reduce our fiscal deficit."

The February consumer price index (CPI) rose to 5.37% versus 5.11% in the previous month mainly due to a spike in food inflation (6.7%) with vegetables registering the sharpest rise; however the industry output data for January came out at 2.6% and beat consensus by a broad margin.

Soumya Kanti Ghosh, chief economic adviser, economic research department, SBI, says, "It is likely that the RBI may wait and watch for the next rate cut but will still frontload it in the first quarter of 2015-16 on the back of a possible Fed rate hike between June to September. IIP numbers surprised on the upside, but in February could trend lower."

For the next week, Kamath says, "We expect the weakness to continue next week and would advice a cautious wait and watch approach."

Jayant Manglik, president-retail distribution, Religare Securities, says, "We expect decline to extend further and sustainability below 8,670 spot in Nifty could further retrace it to 8,475 in the coming sessions. We have not seen major correction in the cash segment and if the index slips further, stock specific decline may intensify. Traders should strictly follow stop losses or keep their leveraged positions hedged. We suggest to prefer low beta counters for day trades."

On Monday, WPI inflation will be the major data for the Indian markets.