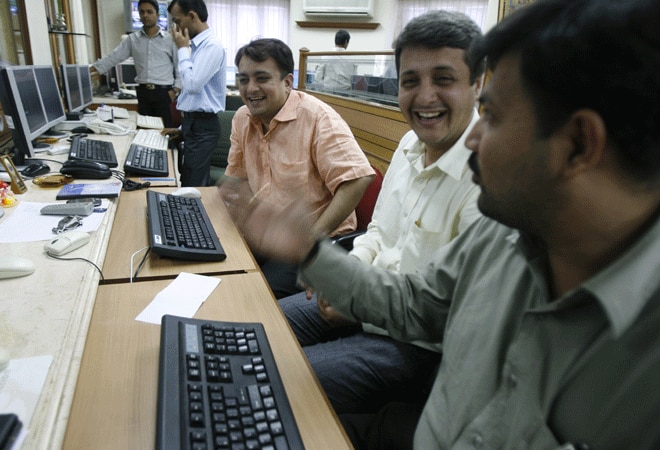 The BSE metal index rose to a record level of 12,497 points, up 219 points. Hindalco was the top metal index gainer rising up to 4.62% at 216.10 level after Birla group flagship Hindalco announced acquisition of American aluminium maker Aleris in  a $2.58-billion leveraged deal through its overseas subsidiary Novelis that will help it diversify product offerings in the value-added products segment.

VK Sharma, head, PCG and capital market strategy at HDFC Securities said, "The markets are at an all-time high because something very basic has happened in the last one week. The no-confidence motion moved against the government was defeated by a wider margin than expected. This has in one stroke killed the fears regarding the 2019 elections. The rest is the work of the short covering. We believe the markets are likely to improve to 11,400 before consolidation sets in."

Cigarette-to-soap maker ITC was the top Sensex gainer rising over 3% to a fresh 52-week high of 301.80 after the FMCG firm reported a 10.08 percent year-on-year (YoY) increase in net profit at Rs 2,819 crore for the first quarter in FY19.

Interestingly, FIIs poured in Rs 2,453 crore into equities in trade yesterday. Domestic institutional investors (DIIs) who have been credited with supporting the market for long withdrew Rs 2,716 crore from the Indian market.

The Biocon stock rose up to 8.5% or nearly 50 points to 606 level after the pharma firm reported a 47 per cent jump in net profit at Rs 120 crore for the quarter ended June 2018. The growth was led by strong performance of biologics and research services segments.

The auto maker reported a 26.91 per cent rise in standalone net profit to Rs 1,975.3 crore for the quarter ended June 30, up from Rs 1,556.4 crore in the corresponding period of the previous fiscal.

Ironically, the country's largest carmaker posted its highest profit growth in 18 months in the quarter under review yesterday.

Net profit came below analysts' estimates and proved to be a drag on the stock.

Meanwhile, the Bharti Airtel stock was trading higher in early trade after the telco posted a sequential rise of 17.37 per cent in its profit attributed to owners, which rose to Rs 97.3 crore for the quarter ended June 30, 2018. In the previous quarter, net profit stood at Rs 82.9 crore. The stock rose up to 4.48% to 373.5 level on the BSE .

Sensex heavyweight Reliance Industries was trading 1.45% or 16 points higher at 1126 level ahead of its Q1 earnings to be announced after market hours today.

Market breadth was positive with 993 stocks rising compared to 402 falling on the BSE. 56 stocks were unchanged.