The Sensex and Nifty regained lost ground during the last two hours of trade on Monday with BSE midcaps and small caps lending support to the recovery.  While the Sensex rose 45.20 points to 33,724 level, the Nifty closed 1 point shy of the 10,400 mark, gaining 9.85 points. On the Sensex, NTPC (3.13 percent), Axis Bank (2.73 percent) and ONGC (1.41 percent) were the top gainers. Here are the key highlights, which affected the market today.

3:45 pm: The stock of IT firm Mindtree rose over 7 percent on Monday after Credit Suisse upgraded the Bengaluru-based software developer on earnings growth outlook. It closed 7.40 percent or 37.90 points higher at 549.85.

2:05 pm: "Election outcome in the PM's home state of Gujarat is another important trigger as a weak showing in this state would be perceived as loss in his popularity and therefore could be read as a sign of slackening in NDA's prospects in the 2019 elections," said Sanjeev Zarbade, Vice-president- PCG Research, Kotak Securities.

1:44 pm: ICEX launches 50-cents diamond futures contract. The 50 cents contracts for expiry in February, March and April 2018 are expected to attract more industry players as half carat diamonds are used in jewellery. 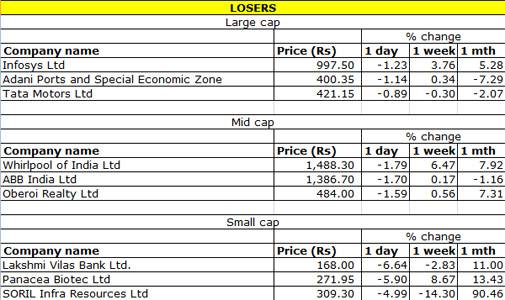 12:45 pm: "With temperatures falling and elections being hotly contested, market will take a pause and rest for a while before taking any meaningful direction. There are so many important events that the market is waiting to react, from state elections to RBI's MPC meeting, US FED year end meeting for interest rates etc," said Jimeet Modi, Founder & CEO of Samco Securities. 12:30 pm: Axis Bank is the top gainer on the NSE index, rising as much as 2.3 percent in its third straight session of gains.

12:17 pm: The S&P rating was slightly disappointing as some upgrade had been anticipated following Moody's recent positive rating action, said Anita Gandhi, whole-time director at Arihant Capital Markets. "In terms of valuations, markets are slightly on the higher side. The driving factor going forward will be the GDP and fiscal deficit data, expected on Thursday," she added.

11:37 am: "The S&P rating agency reiterated its BBB-rating on India with a stable outlook, indicating that the rating is unlikely to see a change in the near future," Scotiabank said in a note.

11:24 am: Larsen & Toubro (L&T) said its construction arm has won orders worth Rs 3,572 crore across business segments. L&T said transportation and infrastructure business has bagged order an worth Rs 1,358 crore from Bangalore International Airport Ltd. Its metallurgical and material handling business received orders worth Rs 1,264 crore in the domestic market. Shares trading 0.65 percent higher at 1224 level on the BSE.

11:22 am: Oil marketing companies slump in early trade as crude prices hit 2-year high. Hindustan Petroleum Corp shares fall as much as 1.84 percent to Rs 422, lowest since November 23, while Bharat Petroleum Corp and Indian Oil Corp slip as much as 1.8 percent and 1.7 percent, respectively. US oil prices hit their highest levels in more than two years on Friday following the continued shutdown of the Keystone pipeline; the prices eased on Monday on the prospect of increased US output.

10:33 am: Foreign investors have pumped over $2.6 billion in the country's capital markets this month so far, propelled by government's announcement of recapitalising PSU banks and India faring well in the World Bank's 'ease of doing business index'. This follows a net inflow of over Rs 19,000 crore in capital markets (equity and debt) last month.

10:32 am: According to depositories data, foreign portfolio investors (FPIs) infused Rs 16,455 crore in equities during November 1-24, besides, they put in Rs 754 crore in the debt market during the period under review, resulting in an inflow of Rs 17,209 crore $2.65 billion). Overall, FPIs have invested Rs 53,800 crore in equities this year and another Rs 1.46 lakh crore in debt markets. Though overall exposure in 2017 was more tilted towards debt instruments, it is worth noting that the FIIs have preferred largely equities rather than debt investments in November. If this reversal continues, it would be good for the markets.

10:15 am: The National Pharmaceutical Pricing Authority has capped the prices of 51 essential formulations, including those used for the treatment of cancer, pain, heart conditions and skin problems. The prices have been slashed in the range of 6 to 53%.

10:00 am: Shares of Sun Pharma slip as much as 2.1 percent to Rs 538.25, post their biggest intraday percentage loss since November 15. Stock among top percentage losers on the broader Nifty 50 index. The drugmaker's unit on Friday issued voluntary recall of two batches of Riomet, an oral diabetes drug, due to microbial contamination. The drug is manufactured by a contract manufacturer.

9:54 am: The number of unsold housing units in the seven major cities stood at 685,000 units at the end of September quarter, a fall of 9% from the year-ago period, according to Anarock Property report. The national capital region (Delhi-NCR) has the maximum unsold units at 200,000, although the number has declined by 12,000 units from the September quarter of 2016 calendar year.

9: 52 am: Bank Nifty trading 50 points lower to 25,730 points.
9:50 am: Top gainers on the BSE are GHCL  (8.81 percent), Nilkamal (6.33 percent), and Videocon Industries (4.67 percent).
9: 45 am: Asian markets are trading lower, except Australia, led by Korea ahead of the scheduled Bank of Korea meeting on Thursday in which, as per Reuters poll, it is expected to hike rates. South Korea's KOSPI fell 1.3 percent as tech shares slumped following an analyst's report suggesting the memory chip "super cycle" would soon fade, led lower by Samsung Electronics

Shanghai shares were down 0.7 percent, reaching a three-month low.

In Europe, markets closed mixed on Friday as market participants watched developments in Ireland and Germany due to political uncertainty.

US markets closed higher with S&P 500 hitting 2,600 for the first time as investors bet on strong holiday shopping season ahead.