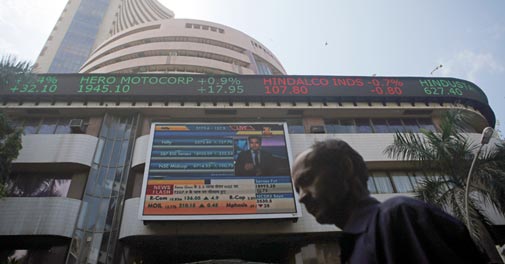 Notwithstanding week-end profit-booking washed out major part of early four days of gains due to comments from RBI Governor Raghuram Rajan about high inflation and interest rates, the S&P BSE benchmark Sensex finished the week up by another 70 points at 21,133.56.

The week saw that the sensex recorded an all-time closing peak of 21,373.66 on January 23 while the Nifty registered its second biggest closing of 6,345.65 on the same day.

Shares of IT, Banking and Consumer Durable sectors firmed up on good buying enquiries while refinery, realty and power counters met with strong resistance at higher levels.

Foreign Institutional Investors continued their buying during the week by investing net Rs 943.34 crores as per the SEBI's data including the provisional figure of January 24.

However, the second rank counters underperformed the index, mainly due to profit-booking by wary retail investors at higher levels. The BSE-Midcap and Smallcap indices closed down by 0.49 per cent and 0.50 per cent respectively.

The sensex fell by 240 points on Friday after RBI Governor Raghuram Rajan's comments on inflation which dashed hopes of a rate cut in next week's monetary policy review.

Mr. Jignesh Chaudhary, Head Of Research, Veracity Broking Services said,"Indian equity markets traded from positive to range bound the better part of the week, before shedding most of its gain on the last trading day of the week. There were some good rallies seen in the Banking, IT and Pharma stocks during the week."

Coming elections no cause for investor worry