BT MindRush rapid fire: What clicked for and transformed the CEOs 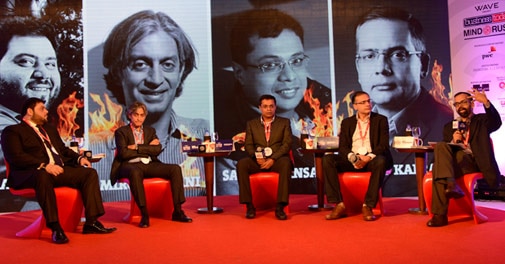 Deep Kalra, Chairman and Group CEO, MakeMyTrip revealed that the company in its founding years had seen tough times leading him to consider going back to the corporate world.

However, what kept him going were the lessons he learnt during earlier failures. MakeMyTrip in India began in 2000, but as the market was not ready for it, he concentrated on non-resident Indians (NRIs) rather than within India. His message: hang on in tough times. "Entrepreneurs are lucky to get an opportunity and they should make the most of it."

Talking about team and responsibilities, Kalra pointed out, "It's a big mistake to make people do everything. At an early stage of the business, all rounders are assets. But when it scales up, specialists are necessary."

He added that it was imperative for a leader to play to strength of the team rather than making them do everything.

IIT alumni, Sachin Bansal, CEO and co-founder, Flipkart, the e-commerce site that sells everything from books, air conditioners, air coolers, stationery supplies and life style products recalled the time when he was funding the business from borrowed money from parents and an opportunity came to sell off the business in 2008, which he almost considered till his mentor friend Aman talked sense in them.

"I learnt that people who are not running the business have a better perspective of it. As they are not attached, they have a 360 degree view of it and are objective. It's very important to listen to such people who have that perspective."

Bansal shared the big learning of involving customers in every decision after a marketing failure of their 2011 TVC bombed despite mammoth investment.

"I did some 100 customer interviews a day and realised the customers were not ready to trust someone in the cloud. We learnt that it was imperative to take customer feedback on everything we did. Since then we have made it a science."

Riyaaz Amlani, MD, Impresario Entertainment and Hospitality shared with the packed house how his professional life had been a series of accidents and he got into the restaurant business out of sheer frustration. His big learning in brand building came when a customer who stumbled upon his maiden coffee joint came back the next day with a bunch of friends and vouched for the coffee! "Getting a customer to take ownership of your brand is phenomenal for the brand. And finding such brand champions within customers in the starting phase of the business is critical in brand building."

His company has some 30 restaurants across eight cities under various brands such as Mocha, Smoke House Grill, Stone Water Grill and Salt Water Café among others. He added he was a control freak wanting to do everything on his own, till he learnt the art of benevolent negligence which has worked very well for him.

"I learnt to detach, to tell the team to figure out things on their own, which led to people taking ownership. We failed at times, but the team grew to take collective ownership."

On a lighter note Venture capitalist Sasha Mirchandani, co-founder of Mumbai Angles and Kae Capital shared his love for cars and how it was his demand for a Mercedes from his father at the age of 22 that gave him the biggest lesson of his life. He told me to buy it with my own money. "You have to do it yourself," his father said. It took Mirchandani 18 years to buy a second hand Merc!

Kalra stressed that you can't really have a Plan B. "Within the business, you can have plans B, C and so on, he says, but you have to believe in your main business. You are doomed if you don't."

Why Vaikuntha is Better than Swarga: Devdutt Pattanaik