BT MindRush 2013: Re-engineering India Inc is need of the hour

"We have to re-engineer government processes and also use technology to ensure that delays are cut," said a candid Anand Sharma, Minister of Commerce & Industry. 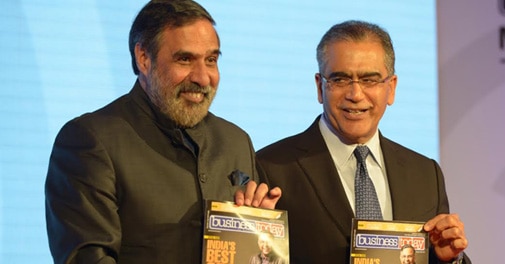 There is a need to 're-engineer' corporate India at a challenging time with the Indian economy slowing down. A high-powered panel at Business Today's Mind Rush event deliberated on the subject and there were no dearth of ideas.

"We have to re-engineer government processes and also use technology to ensure that delays are cut," said a candid Anand Sharma, Minister of Commerce & Industry.

Malvinder Singh, Chairman, Fortis Group listed out four focus areas for India including reviving stalled infrastructure projects, pushing ahead with more reforms, ensuring a strong governance mechanism and creating a skilled manpower. "Ask not what the government will do for you, ask what we can do for India," said Singh.

Sharma, who ensured a major victory for India on the food security issue at WTO's Bali meet, argued that," if every decision (of the government) is getting questioned or when every signature is questioned, the delays are bound to happen."

India has to think about an institutional framework for allocating national resources, according to Naina Lal Kidwai, Country Head, HSBC India. "There is much to be done. We must not give up," said Kidwai.

Sharma pointed out that the government must guard against 'over-regulations' and said a middle ground has to be found on most issues. "But don't do over-regulation. Over-regulations will lead to corruption," he said.

Kidwai pointed that a high fiscal deficit remains a cause for concern. But what worries her more is the sluggish GDP growth. "The near term still looks quite tough and slow," said Kidwai.

"It is about the opportunities. It is fair to say there is no other country in the world which has the opportunity and the potential that India offers," said  Natrajan Chandrasekaran, CEO, Tata Consultancy Services. Agreed Singh of Fortis, "If you don't enter India now, I really wonder when you will want to enter India," he said.