TCS has seen a scorching pace of growth ever since N. Chandrasekaran took charge as its CEO. This year, for the second year running, the company topped the BT500 list of the most valuable companies. "You have to get a life before you can have a proper work-life balance," said Infosys Chairman Narayana Murthy in his thought provoking address which kicked off Business Today's two-day MindRush event, a conclave of ideas held at The Oberoi, Gurgaon from December 13. Murthy was speaking on 'What business taught me about the business of life'.

The event also saw the announcement of the Best CEO Awards of 2013, chosen by Business Today, with knowledge support from PwC India. The awards were given away by Minister for Commerce and Industry Anand Sharma and Business Today Editor-in-Chief Aroon Purie. 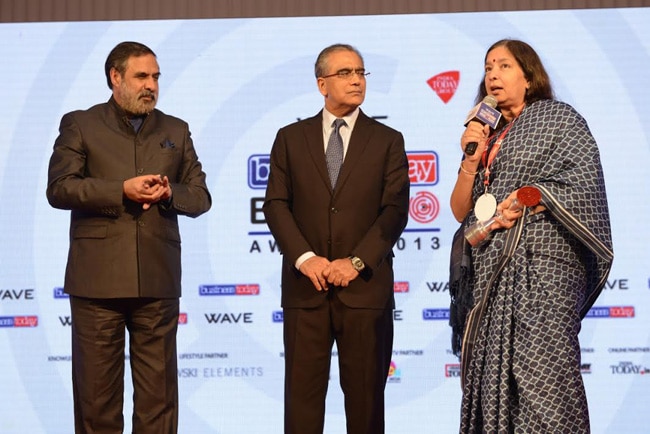 Axis Bank similarly has prospered under Shikha Sharma. Is it harder to be a women CEO, Sharma was asked. "Frankly, no, as we all are operating in the same space. It's all in our mind and we have to get it out of our head," she said.

Delivering the keynote address, Anand Sharma said: "In recent years, decision-making in government has been delayed. We have to re-engineer government departments to meet industry expectations."

Speaking with Purie at the completion of his speech, Narayana Murthy defended himself against the charge that he had violated good corporate governance principles by inducting his son Rohan into Infosys. "My son has done a high-quality PhD in computer science. On the issue of meritocracy, there is nobody as qualified as Rohan in the company," he said, noting that Rohan was paid a salary of just one rupee a month.

The next event was a session in which CEOs were asked to reveal the best advice they ever got. Bhaskar Pramanik, now Chairman, Microsoft India recalled Ratan Tata telling him when Pramanik was 28: "Make sure both sides make money."

Ajay Kaul, CEO of Jubilant FoodWorks which holds the Domino's franchise, said his best advice came from his father. "Never let your feet leave the ground," his father had said. "Continue being a good human being before all."

Given the gloom surrounding the economy, one of the highlights of the evening was a panel discussion on 'Bridging the Fault Lines: How to re-engineer India Inc'. The panelists were Anand Sharma, Chandrasekaran, Malvinder Mohan Singh, Chairman, Fortis Group; and Naina Lal Kidwai, Country Head India, Director HSBC Asia Pacific & President FICCI, while Business Today Managing Editor Josey Puliyenthuruthel was the moderator.

Business Today MindRush, sponsored by Wave will continue till on Saturday (December 14) with power-packed sessions on health and fitness, disruptive innovation, mindful eating, mythology and management, and more.

'Re-Engineering India Inc is need of the hour'