Business Today's Josey Puliyenthuruthel asked whether we are currently seeing a bubble-like situation building up with companies getting valued in multiples of their gross merchandise value and not EBITDA. 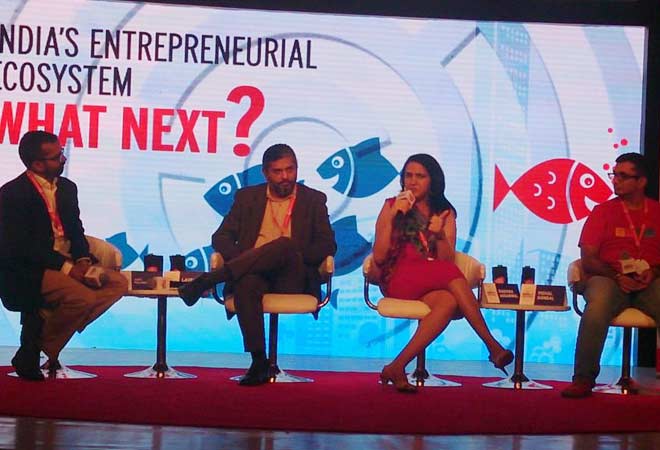 At a time when many start-ups in the country have attracted massive funding that has raised concerns of a possible bubble building up, a panel of experts on day two of Business Today's MindRush conclave of business leaders discussed the way ahead for India's entrepreneurial ecosystem.

Panelists opened the session with some background on their entrepreneurial stints. Aggarwal spoke about her previous unsuccessful stints with entrepreneurship before founding e-commerce company Shopclues. "I have been third-time lucky with Shopclues," she said.

Gondal spoke about the challenges during his early days of starting gaming company Indiagames.

"When I started my first company in 2008, I did not know what venture capital meant. Then I got to understand it as something as good as a loan that need not be paid back," said Gondal, who started his first venture when he was only 16.

The time is much better now for entrepreneurs with so many venture funds around and even investors abroad willing to take big bets on Indian start-ups. Entrepreneurship is always a roller-coaster ride and so it was for Gondal.

"I survived the first bubble and the second bubble. In 2012, I successfully sold Indiagames to Disney but moved on because I did not want to be in Disney World forever. Finally, now I have started a wearable gadgets venture Goqii."

Speaking about the hype around start-ups raising funds, Bhandari said, "I am quite surprised when VCs come to me and tell me to grow at 10 to 20 per cent. A lot of opportunities get lost because investors are looking at those that grow 10X every year, while most businesses grow only at 2X or 3X. If you are aiming at entrepreneurship, one should not miss out on those opportunities that scale slower but can be very attractive and sustainable areas to get into," he said.

Business Today's Josey Puliyenthuruthel asked whether we are currently seeing a bubble-like situation building up with companies getting valued in multiples of their gross merchandise value and not EBITDA.

Gondal said that in India there could be about 25 start-ups with a billion-dollar valuation in the next 12 to 18 months.

"You can call it a bubble, but the reality is that in China there are already 50-odd companies that have achieved that. The valuation is also part of the fact that all the action that is happening is in India. If you see what Alibaba did to its investors, we are expecting the same in India," he said. "Things are more realistic this time than in late 90s."

Aggarwal said: "There may be some froth but valuations are completely defensible now. India is at an inflexion point in several ways including those like the Internet penetration on mobile phones."

Are a lot of young people choosing entrepreneurship? Bhandari said, "The cost of entry into the entrepreneurial ecosystem has gone down dramatically. The only thing that is stopping people is high salaries." Aggarwal said, "Earlier if you had to start a business, there was so much that you had to look at completely from scratch, including what technology to use and how. Now it is much faster because so many things are already available."

Gondal pointed out an intereting trend which is in sharp contrast to the scenario years earlier.

"Today, there are people who have left everything and they ask me tell me what to do next. This means entrepreneurship is being celebrated. While earlier you would wait to get funding to take the risk of starting up. Now it is a great thing to say that I am an entrepreneur."