Docker conducted a more than two-hour session that was intended to make leaders aware of how the brain works and how to engage in Right-to-Left thinking. 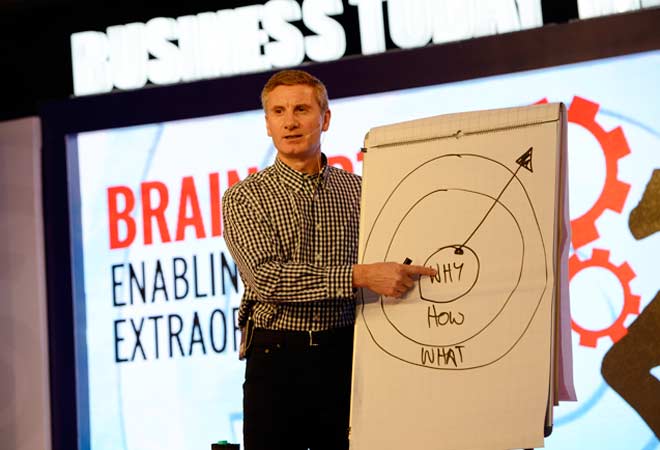 The secret of successful brands such as Apple and Virgin is that these companies have a grip on why they do, what they do and this is what all businesses must do to succeed, leadership and motivational expert Peter Docker said on Saturday.

"Successful leaders and brands first begin with 'why' and then get on to the 'what' and 'how' to do what they do,"  Docker told a packed audience of CEOs and industry veterans on the second day of Business Today's MindRush conclave in New Delhi. The brands that figure out their integral belief and purpose of choosing to do what they do are invariably more successful than others, he added.

Docker conducted a more than two-hour session that was intended to make leaders aware of how the brain works and how to engage in Right-to-Left thinking. In fact, he admitted to drawing on views by Simon Sinek's theory of The Golden Circle, who authored a book on Start with Why: How Great Leaders Inspire Everybody to Take Action.

Docker had everybody's attention when he started the session with an anecdote on Malala Yousafzai, the yougest Nobel Peace Prize winner, who's famously said that one child, one teacher, one book, one pen can change the world.

Docker spoke about how simple thoughts and speech had the power to get people hooked. But it isn't easy to be simple, he said. He gave examples of how telecom operators in the UK were busy dishing out deals to the point that business was getting unsustainable. To counter this, he cited the case of how Virgin regained its railway franchise from the UK government, based on customer demand and loyalty - despite it being given out at a higher price.

Underpinning all this was also the way people tended to use their brain and rely on what he called 'lymbic brain'. That is, people use emotions to often make decisions. He talked about how people tended to think left to right, in that they used past experience to determine future decisions. "But that was not how visionary business or action could take place," said Docker. Often, leaders do the opposite, they take right-to-left decisions that involve them standing in the future. The most famous instance being that JF Kennedy, who declared that the US would put a man on the moon and bring him back.

Successful vision building involved complete committment to a belief and declaration of that belief on part of the leader. It has to be sustained with adaptive leadership, ability to inpire trust and ability to build and maintain relationships, Docker said.

Focus on consumer needs is key to success: Ram Charan