Recognised as one of the most coveted industry awards, BT Best CEO Awards are evaluated on several business parameters including the company's growth in revenue and profit, innovation and transformational changes, impactful strategies and contribution to the nation's growth 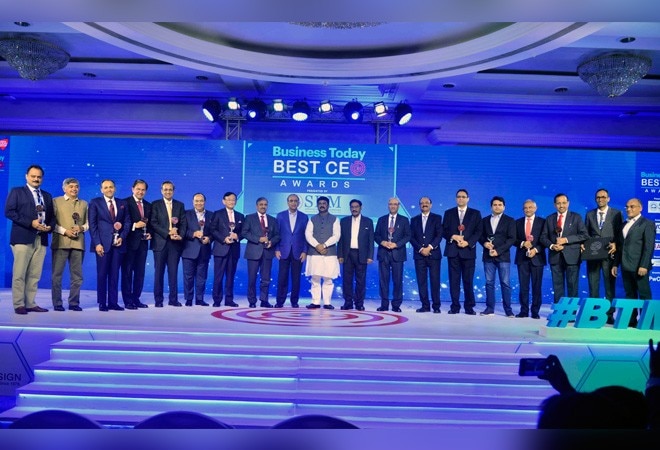 Business Today's annual business conclave MindRush that felicitates India's best CEOs for corporate excellence was held in Mumbai on Friday. The seventh edition of the India Today Group's flagship business event brought corporate stalwarts, market experts and management gurus under one roof to discuss concurrent business issues and improvise management thought process to increase productivity at the workplace and produce leaders of tomorrow. The theme this year was 'Disrupt or Die'.

Recognised as one of the most coveted industry awards, BT Best CEO Awards are evaluated on several business parameters including the company's growth in revenue and profit, innovation and transformational changes, impactful strategies and contribution to the nation's growth.

Dharmendra Pradhan, Union Minister for Petroleum and Natural Gas and Steel delivered the keynote address and handed over the awards to the winners.

"The Indian industry is going through disruptions but that does not mean that you will die if you don't disrupt," he said, adding that data is the new oil and the government is formulating a new data policy.

This year, the CEOs were evaluated under 15 categories.

Anil Rai Gupta, CMD, Havells India won the Best CEO Award in Consumer Durables category. In Financial Services, Rajeev Jain of Bajaj Finance was awarded. In the FMCG segment, the award went to Suresh Narayanan of Nestle India, while CP Gurnani of Tech Mahindra was the winner in the IT and ITeS category. In Oil & Gas category, the winner was Mukesh Kumar Surana of Hindustan Petroleum. In the power sector, the winner was IS Jha of PowerGrid and in the PSU category, BC Tripathi of GAIL. In the Auto and Auto Ancillaries, Siddhartha Lal of Eicher Motors stood first, while in the banking category, Uday Kotak of Kotak Mahindra Bank. In the Pharma & Healthcare, the winner was Dr Murali K Divi of Divi's Laboratories. In Emerging Company, the winner was Nirmal K Minda of Minda Industries. In the Medium Company category, Bhaskar Bhat, former CMD of Titan won the award. Kenichi Ayukawa of Maruti Suzuki won the award in Large Company category and Mukesh Ambani of Reliance Industries in the Champion of Champions/ Super large companies category.

Speaking at the event, Aroon Purie, Chairman & Editor-in-Chief of India Today Group, said, "Disruption is not a threat, but an opportunity. It will destroy businesses, wealth and jobs, but it will also open up new businesses."