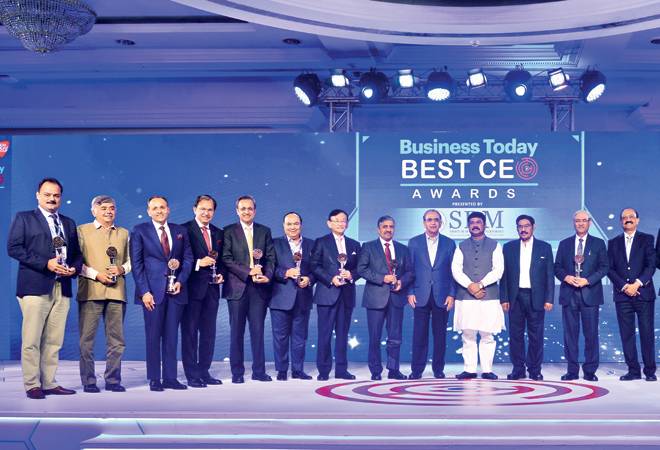 We live in disruptive times. As technology is changing the way most businesses function, they have to deal with blistering change. This year's theme of the seventh edition of the annual conclave, Business Today MindRush, 'Disrupt or Die', was apt for such times. India's leading businessmen graced the event at the Taj Lands End Hotel in Mumbai on December 13 where 15 captains of industry were felicitated with Best CEO Awards for excellence in their fields.

Dharmendra Pradhan, Union Minister for Petroleum and Natural Gas and Steel, delivered the keynote address and handed over India's Best CEO awards to the winners. "Indian industry is going through disruptions, but that does not mean that you will die if you don't disrupt," he said, adding that data is the new oil and the government is formulating a new data policy. He added that India is progressing in the right direction and the country will become a developed nation in the coming years despite hiccups.

Aroon Purie Chairman & Editor-in-Chief, India Today Group, said, "Disruption is not a threat, but an opportunity. It may or will destroy businesses, wealth and jobs, but it will also open up new opportunities."

The minister unveiled the redesigned Business Today (BT). Speaking about the 'Digital First' philosophy at BT, Aroon Purie said, "Beginning with this issue being unveiled here today, you will see Business Today in a refreshing 'Digital First' avatar. Our presence on the web businesstoday.in is the fulcrum of this change as it brings to you the latest on business and economy via stories, podcasts, videos, infographics and slideshows, making full use of the multi-media potential of the digital platform."

The day started off with author Ashwin Sanghi talking on 'Ringing in the Riches". He drew lessons and parallels from mythology and modern business. He said, the lifecycle of an enterprise has parallels with the two trinities of gods Brahma, Vishnu and Shiva and goddesses Saraswati, Lakshmi and Durga. A start-up is about creation, while growth and preservation are needed to make the business grow. After reaching a certain level, there is need for renewal and transformation.

While technology is disrupting businesses across the value-chain, what people will always need is good health. Most people avoid an exercise regime due to lack of time. Addressing the 'time' challenge, holistic fitness trainer and pilates teacher Vesna Pericevic Jacob said you don't have to slot a special hour in a day for exercise; take out time for small pockets of movement through the course of the day. "If it is acceptable to go out for a tea or cigarette break, why should an exercise break be looked down upon?" she said. Echoing the thoughts, fitness and wellness expert Nawaz Modi Singhania said there are exercises that give you high impact in less time. "There are a variety of exercises that you can do in your cabin or sitting on the chair."

We are a country of start-ups. Focusing on that, the opening discussion of the day was 'Unleashing a Hundred Unicorns'. Four venture capitalists got together to explain how the time to become a unicorn is shrinking. It took Flipkart five years to become one, while Udaan made the cut in two years. Anjali Bansal of Avaana Capital, Karthik Reddy, Co-founder of Blume Ventures, Rehan Yar Khan, Managing Partner of Orios Venture Partners, and Tej Kapoor, Managing Director and Head of Fosun RZ Capital India, pointed towards a confluence of factors that is leading to this.

The next session by Kavil Ramachandran, Professor and Executive Director, Thomas Schmidheiny Centre for Family Enterprise, Indian School of Business, Hyderabad, was on how in this era of widespread disruption, it is necessary for family businesses to have awareness of disruption and bring in professionalism. Speaking on 'How to fortify family business', Ramachandran said family businesses should do a PEST (political, economical, socio-cultural and technology) analysis and scenario building, find opportunities in disruption, balance portfolio of products, have a quick but balanced response, sustain owner passion and bring in a board for constant monitoring and advice. He pointed out that most listed companies in the top 4,000 are medium scale companies with less than Rs 1,000 crore turnover and out of the 7,000 listed companies, 91 per cent are family enterprises.

After family businesses, the focus was on how the telecom business has been disrupted. In a case study on wiring revolution, Shyam Mardikar, Group Chief Technology Officer (CTO)-Mobility at Reliance Jio, said the digital world needs digital consumers and they are the central pillar of the changing telecom game. Smartphones have become a window to the outside world, he said. According to him, a billion consumers migrated to the digital world in the last 3-4 years.

Economic analyst Pranjal Sharma warned the audience at the start of the session, 'Rethinking the Future', that their lives were in danger. He was referring to the fact that automation - from drones to artificial intelligence to blockchain - will impact jobs and lives in ways we find difficult to imagine. In a country where a million people enter the job market every month, this can be potential disaster. He said we do not have a choice, as this is already happening. "Automation is happening but India does not know how to embrace it," said Sharma.

Continuing with the disruption theme, the next session was on co-working. Why is India's co-working industry growing this fast? Harsh Lambah, Country Manager India at IWG; Karan Virwani, CWeO at WeWork India; Ritesh Malik, Founder of Innov8 Coworking; and Sandeep Sancheti, Vice Chancellor, SRM Institute of Science and Technology, got together to underline many factors that are contributing towards this growth. The millennial employee is at the heart of the trend. Virwani pointed out that corporates are now forced to focus on employee engagement and experience. "There is a fight for talent, and to retain them. Most companies have realised that millennials give importance to the culture and the environment they work in. Companies want to transform themselves for this talent. They want to create working environments that are super engaging. There is a complete shift in the mindset," he said.

In a disruptive world, one of the problems that no one talks about openly is mental health. It is a huge stigma in India. Addressing the taboo, Neerja Birla, Founder and Chairperson, Mpower, emphasised the importance of discussing mental health issues at the workplace. "Don't hesitate to talk about mental health. If you are seeing symptoms of depression, don't hesitate to talk about it," said Birla. According to her, over 42.5 per cent of employees in the private sector suffer from forms of mental illness such as depression and anxiety. "Mental health will cost $16 trillion to the global economy by 2030. That's the magnitude of the problem of mental health. However, the bulk of Indian companies don't recognise the gravity of the situation."

"There is confusion, fear and frustration among investors. They feel this (rally) is not reality. If you see the top 50 listed companies, about 10 names have done well, while 40 have de-grown. If you look at mid-caps and small-caps, the story is even more difficult," Radhika Gupta, CEO, Edelweiss Asset Managment, said at a panel discussion 'Bulls Vs Bears'. Vijay Chandok, MD and CEO, ICICI Securities, said everything being seen in the markets is perhaps not how things actually are. "Macro numbers are not reflective of headlines. But markets are reflecting two factors - there is a lot of global liquidity chasing returns and there is a concentrated focus on some stocks."

Quite like Sanghi linked business to mythology, leaders of today's organisations should learn from epics such as Mahabharata, Ramayana and ancient management expert Chanakya's Arthshasthra to bring in changes, said Radhakrishna Pillai, management expert and author of the book, Corporate Chanakya. Speaking at a session, he said ideal leaders require certain traits. One of them is the ability to gather and dissect information, by either directly pursuing or indirectly pursuing or through perceived or inferred collection of information. He said leaders should also keep inspecting or reporting their own work to learn and stay updated as continuous study ensures a trained intellect that can do practical applications.

At a time when the economy is in slowdown mode, the panel that discussed 'Disrupting the Slowdown' said the worst is not behind us in terms of falling GDP. "We are not seeing a bottoming out of GDP. There is a need to stop denying that there is a slowdown. This government takes too long to accept that there is a problem. This denial is causing the problem and also causing confusion," said Mahesh Vyas, CEO, CMIE.

"It is not right to say that the government is in denial," countered Jay Panda, a BJP senior leader. He said the government has been taking steps to counter the slowdown. Take, for example, the cut in corporate tax rates, he said. "The RBI has responded by lowering interest rates," he added.

India may be going through a slowdown, but it's certainly not doomsday, said CEOs of India Inc at the Business Today MindRush event. Despite the automobile sector being the worst impacted in the current economic slowdown, Maruti Suzuki India, CEO, Kenichi Ayukawa, said that he looks at India as the most progressive market in the world. "We are investing and preparing for the future," he said. Suresh Narayanan, Chairman and MD, Nestle India, said that consumption may have dropped from 11-12 per cent to 7 per cent, but the roof hasn't fallen. "I am optimistic about the Indian economy. It may not be a quick fix, but it's certainly not doomsday."

Anil Rai Gupta, CMD, Havells India won the Best CEO Award in Consumer Durables category. In Financial Services, Rajeev Jain of Bajaj Finance was awarded. In the FMCG segment, the award went to Suresh Narayanan of Nestle India, while C.P. Gurnani of Tech Mahindra was the winner in the IT and IteS category. In the Oil & Gas category, the winner was Mukesh Kumar Surana of Hindustan Petroleum. In the power sector, the winner was I.S. Jha of PowerGrid and in the PSU category, B.C. Tripathi of GAIL. In the Auto and Auto Ancillaries sector, Siddhartha Lal of Eicher Motors stood first, while in the banking category, Uday Kotak of Kotak Mahindra Bank. In Pharma & Healthcare, the winner was Murali K. Divi of Divi's Laboratories. In the Emerging Company category, the winner was Nirmal K. Minda of Minda Industries. In the Medium Company category, Bhaskar Bhat, former CMD of The Titan Company, won the award. Kenichi Ayukawa of Maruti Suzuki won the award in Large Company category.

Mukesh Ambani of Reliance Industries won the award in the Champion of Champions and Super Large Companies categories.

The sponsors of the event were SRM Institute of Science and Technology (Deemed to be University), Brother, Diageo, Hidesign and PwC.

BT Buzz: Multicap funds turning into flexi-caps; what does it mean for you?