Going for part-settlement of a loan you have defaulted on can impact your credit report negatively.
Dipak Mondal/Money Today | Print Edition: July 2013

If you have defaulted on a loan and get a call to 'settle' it for less than the amount outstanding on the bank's books, don't accept the offer blindly. Such a 'settlement' can unsettle your credit history and impact your ability to access loans in the future.

Though you may feel that calls from the bank's recovery unit will end after the 'settlement', a valid reason for accepting the bank's offer, this comes at a price, something that most people are not aware about.

However, the bank does not tell you that doing this is like admitting that you lack the ability to pay the entire amount, and that this will be reported to the credit bureau . The bureau, on its part, will mention the 'settlement' in your credit report, which means you will have difficulty in accessing loans in the future.

HOW IS A LOAN 'SETTLED'?

Settling a loan means paying a part of the total amount due as you are unable to pay in full. This can also be done if there is a dispute between you and the lender.

"The amount can be negotiated with the lender, but in most cases it is not less than the principal," says Arun Ramamurthy, co-founder, Credit Sudhaar, a company that helps debt-trapped people improve their creditworthiness.

After the settlement, the bank writes off the difference between the amount due and amount paid from its books and reports it as a loss.

Once the loan account has been settled, the bank would stop sending recovery agents after you.

The relationship between the bank and the customer is terminated after this. If the customer is making full payment, the account is closed in the bank's books. However, in a settlement, the bank writes off the waived amount and books losses. Most banks upload the names of customers whose loans have been written off in their blacklist database," says Manish Sinha, head, customer value management, HSBC India.

In case of dispute over the amount due or late payment fee also, the borrower can arrive at an agreement with the lender to pay a part of the dues and 'settle' the account.

"In such a case, the borrower should negotiate with the bank to clear the disputed items before paying the amount in full so that the account is not reported as 'settled'. The borrower should also seek a 'no-dues certificate' from the bank," says Amit Bhatia, director and head, assets and business banking, Deutsche Bank India.

Before settling a disputed loan, borrowers must avail of the chargeback facility under which the disputed transaction is temporarily reversed in the borrower's account till the investigation into the dispute is over.

While settling the loan will give you respite from recovery agents, it will damage your credit history. This is because after the paperwork, the lender will report the settlement to the credit bureau.

Though your credit report will not show any amount overdue against your name, the account status will show 'settled', which means the loan has been repaid only in part. This is enough to spoil your credit report. When you approach another bank for a loan, it is highly likely that your application will be rejected. This is because your credit report says that you have in the past failed to fully repay a loan.

"The customer may go for settlement on one or more than one credit facility with the same bank or multiple banks. However, this leaves a trail of poor credit history at the bureau. The customer will have difficulty in obtaining further credit from same or other lenders in the market," says Manish Sinha of HSBC India.

Any loan account overdue by more than 90 days is classified as a non-performing asset. Banks usually write off loans 180-270 days after the payment date. The settlement can happen both before and after the write-off.

The worst part is that people opting for settlement are not even aware of the fact that it will ruin their credit report.

"In 95% cases, the process is outsourced to agencies, and people working there are themselves not aware that such settlements lead to negative flags in credit reports," says Ramamurthy.

As a result, a borrower would accept the bank's proposal to settle the account without asking for removal of the settled flag from the credit report. 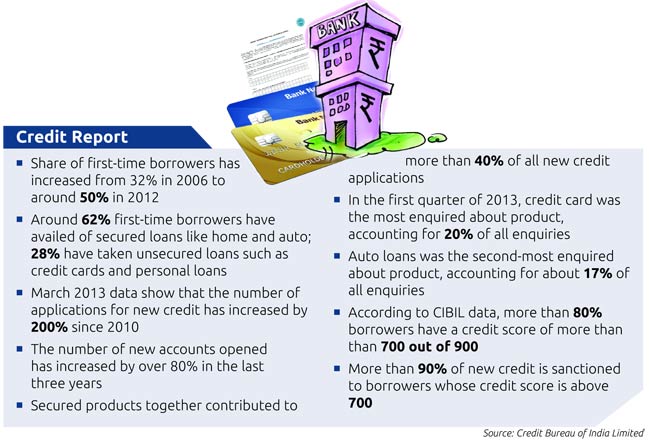 According to the Reserve Bank of India, or RBI, guidelines, once a loan has been settled, no interest should accrue on the residual amount. But this is not always the case. In many cases, lenders keep adding interest and sending warning letters to borrowers even after the settlement.

According to Arun Ramamurthy of Credit Sudhaar, this may happen because of error in reporting the settlement. "In most cases, the reversal (writing off residual amount) is done manually, and mistakes are committed in making entries, leading to a situation where interest is charged on the residual amount," he says. That is why it is important to take a no-dues certificate from the bank after the settlement.

"If the loan has been settled but not written off from the bank's books, the interest will keep accruing, creating a problem in the future when you suddenly realise that dues of Rs 50 have become Rs 500," says Arun Thukral, managing director, Credit Information Bureau of India Limited (CIBIL).

Such situations lead to disputes between the lender and the borrower, creating further hassles for the latter. You can get the 'settled' flag off your credit report by paying the waived amount at a later date.

However, this will not immediately improve your credit history. The credit report's DPD (days past due) section will continue to show that you had defaulted. This section in the report shows for how many days you owed money at the end of a particular month.

The DPD section carries information on dues for the past 36 months. This means even after you pay the full amount, the credit report will continue to show for 36 months the period for which you had defaulted.

A '0' in the DPD section means no dues; anything other than that is negative for the borrower.

For example, if a payment was due on December 2012, and you paid the amount on April 2013, the DPD section would show 30 days, 60 days and 90 days in January, February and March respectively under the months column for 2013. As you cleared your dues in April, the column under April would show a '0'. However, the DPD entry indicating you defaulted on payment in the first three month of 2013 would continue to appear in your credit report till 2015.

This may continue to haunt you despite you clearing all the dues. However, this entry alone will not decide the fate of your loan application.

A prospective lender will take into account many other things, including your credit score and the amount waived at the time of settlement, before taking a decision on the loan application.

However, to avoid these hassles, the best strategy is to pay all your loans on time and keep a check on the urge to overspend on borrowed money.
Tags: loan defaulter | default on loan | loan settlement | lenders | credit score | home loan | car loan | education loan