Mobile wallet allows you to spend without swiping your debit/credit card. We bring you tips on how to use it safely.
Teena Jain Kaushal/Money Today        Print Edition: April 2015 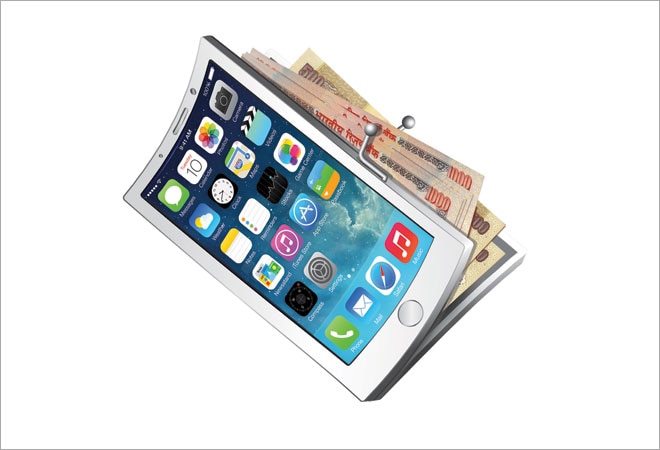 Your phone and you are inseparable. It is your bank, GPS navigation device, watch, music player, and a lot more. It can be one more thing-your wallet.

Mobile wallet, which works like an electronic prepaid card, can be used to pay for things from grocery to rail tickets without the need to swipe debit/credit card. All you have to do is key in the username and password at the time of transaction.

To get started, you have to sign up for the app on your iOS (iPhone), Android or Windows phones. You can then load it with money either through debit/credit card or net banking. After this you can use it to transfer money, pay bills, book tickets and shop. Some apps can be used to pay at physical stores as well.

But how secure is the process? Amit Lakhotia, vice president, payments, Paytm, one such service, says, "You need a username and a password to transact. Moreover, in case of any suspicious transaction, we quickly take action."

Rajeev Ahuja, head of strategy, RBL Bank, says, "Mobile wallet allows you to do what your physical wallet does with more convenience, safety and simplicity and without the security hassles of credit/debit cards and internet banking. What this means is that you can top it up, empty it or use it to make purchases and transfer funds."

With increase in the number of players, the business done through mobile wallets has been growing. According to a report by Crisil, transactions through mobile wallets have tripled over the last two years to Rs 2,750 crore a year. One reason for this growth is increase in use of smart phones. HDFC Bank, for instance, reported a five-fold jump in digital transactions from Rs 795 crore at the end of June 2014 to Rs 3,540 crore at the end of October 2014.

Nitin Chugh, head, digital banking, HDFC Bank, says, "Last year, 85% transactions took place though non-branch channels. Mobile and internet channels contributed 55%. We will launch our mobile wallet soon. It will be very different from what is already there in the market." The current services include Paytm, Oxigen, iKaaz's MOWA (in partnership with DCB Bank) and RBL Bank's Shmart (in partnership with TranServ).

ICICI Bank also recently launched 'Pockets'. Also in the fray are telecom service providers such as Vodafone Plc with m-pesa and Bharti Airtel with Airtel Money.

In a market where everyone from ecommerce websites to banks are launching payment solutions, choosing the right service provider can be a difficult. So, we offer a little help. But first, you must ask the right questions

In pre-paid you load your phone with money either through debit/credit card or net banking. Many wallets also offer loading facility at physical stores. In post-paid wallets such as MOWA, your debit/credit card is linked with the wallet and money is deducted every time you make a transaction. In post-paid wallets your money does not lie with the provider. If you go for a pre-paid wallet, find out how is money transferred back to your account if left unused.

Closed wallets are not linked to banks. Open ones are linked to banks and have a cash-out facility. This means you can withdraw money from the open wallet.

"When a customer returns any good, e-commerce aggregators generally refund money in the wallet, forcing him to spend the money through the wallet. He cannot withdraw that money. In open wallets, there is an option to cash out. Moreover, in case of a bank, it becomes a single wallet which can be used across ecommerce aggregators," says Ahuja of RBL Bank.

Earlier, mobile wallets were primarily used for mobile or DTH top-ups but now the bouquet of offerings has been expanded to include merchants, utilities and various other service providers. You should know how many merchants are part of the network.

Soma Sundaram, founder and chief executive officer, iKaaz Softwares, says, "Mobile wallets should also be used for retail payments. Through our app you will be able to pay using NFC. It is a huge value proposition for customers. We are doing remote utility bill payments by using the app and proximity (physical store) payment by using NFC. We have tie-ups with more than 9,000 merchants." NFC, or near field communication, enables devices in proximity to each other to establish radio communication. It is mostly used for purchases in physical stores.

Mobile wallets use a variety of technologies such as 3G, Wi-Fi, NFC, QR (quick response) codes, and cloud. Though more and more stores are joining these networks, experts say big brands will take some time to come on board. Lakhotia of Paytm says, "We have tie-ups with 18,000 merchants, including, Makemytrip, Fern N Petals and Uber. We are in the process of tying up with more." Experts say mobile wallets can be used for various other purposes. "We are looking at location-based marketing. To explain, if you are passing a Gurgaon market and there is a coffee shop nearby that has signed up with the bank, the wallet may immediately throw a message that you will get a Rs 50 off if you spend at the shop," says Ahuja of RBL Bank. You need to opt for a wallet that gives most value. Take Starbucks, which launched its mobile card app in the US in 2009 in 16 stores. It became so successful that Starbucks expanded it nationwide. By rewarding customers for loyalty, the wallet was an instant hit among coffee lovers.

Check out what are the restrictions before signing up for one. According to the Reserve Bank of India rules, the wallet limit is restricted to Rs 10,000 for a basic wallet and Rs 1 lakh for a KYC-compliant wallet.

The cost varies from wallet to wallet. Check out how much you are charged per transaction. Lakhotia says, "We charge around 2-5% to the merchant for the service. Users are charged only at the time of transferring money." Mobile wallets are yet to pick up but they can certainly help you control expenses by making it easier to track expenditure.

Best loans on offer from public and private sector banks