There is uncertainty in the real estate market as prices dip and demand slackens. We tell you why this is still right time to buy and where you can get good bargains.

>Cold markets, sizzling properties
>Zeroing in on a second home, abroad
>What property investors must know
>Interest rates will come down
>Customer is king, again
>Tips to buy a pre-owned home
>Connectivity gains

Is this the right time to buy a house? It's a question being asked across the country by thousands of potential investors in real estate. Before you even attempt to answer it, just consider the situation in the real estate market. Property prices are falling, interest rates are rising and demand is so low that even big builders are finding it difficult to sell projects.

Demand for housing has come down steeply, pulling down property rates in the past year. Prices in some areas have corrected by as much as 25%. The incessant rise in interest rates has made matters worse. With home loan rates touching 12%, investors don't see real estate as a viable investment anymore. 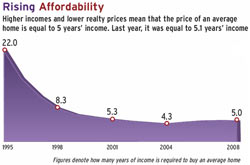 Click here to Enlarge
According to investment banker Credit Suisse, sales volumes in Mumbai in the first six months of 2008-9 are down 14% compared to the same period in the last year. The steepest fall in a month this year was in August 2008 when sales were down 27% compared to last year. So why would anybody want to invest in real estate at this juncture?

However, reality can be very different from perception. True, the property market is having a rough time and a turnaround isn't likely in the near term. But these worst of times also present the best of opportunities for buyers. Even the most pessimistic industry observers feel that the correction in real estate is over. They expect residential property prices to "drift" by 3-5% rather than "crash" further. There are some positive spin-offs because of the drop in demand in the luxury segment. It has forced realtors to focus on the mid and lower ends of the market. This means no frill houses at reasonable prices. 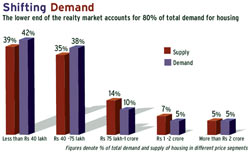 Click here to Enlarge
There is still a lot of demand for housing at reasonable price tags. A new scheme from the DDA got almost 8.5 lakh applications for the 5,000-odd flats on offer. "It proves that people are willing to invest at the right price," says Anshuman Magazine, MD of CB Richard Ellis.

Secondly, developers are offering indirect discounts and funding incentives on projects in the hope of attracting buyers in the festive season. "The present scenario is favourable for end-users since they can bargain for the best deals," says Rohtas Goel, CMD, Omaxe .

It is unlikely that deep-pocketed big builders will cut prices any further. In a report by Citigroup, real estate analyst Ashish Jagnani says that "the probability of large organised developers reducing prices is low, especially with land prices still holding firm and construction costs on the rise."

However, it may be a little premature to say that the worst is over for the real estate market. While prices in most areas have stabilised after correcting from their peak levels, there may still be some pain left in a few pockets of hyperinflation. But it may not be a good strategy to wait for the market to bottom out as you never know when that level is reached.

Wait and lose
What you need to keep in mind is that real estate is not like any other asset class. You can wait it out for a stock price to correct or the bullion market to come down before you enter. But in case of property, once a dream location is gone, it may be gone forever. Remember that there are many investors waiting on the sidelines to pick up property and, for each, the threshold level is different. For someone, a 5% drop in price may be enough. But to another buyer, even a 20% drop may seem too little. So, if there are several properties on offer, the best ones get lapped up first. "If you buy a house for Rs 50 lakh today, the price may fall to Rs 45 lakh by next year. But it could rise to Rs 75 lakh in the next few years," says Goel.

Click here to Enlarge
Basically, you have to choose whether you want to take the risk of a notional loss or compete with 50,000 other buyers waiting for the market to bottom out. "With demand so low, would-be-buyers are negotiating from a position of strength. Even in a weak market, there are always opportunities for investors and buyers to profit," says Abdul Bari, senior VP, Uppal Group. After all, good shoppers don't need to wait for a "discount sale" if they can bargain hard.

Local factors count
Also, property prices, unlike other investments, are greatly influenced by local factors. Prices vary across localities depending on the physical and social infrastructure. So, don't expect a price correction to be uniform across a city or a locality. The locational advantage of physical infrastructure also defines property prices. Areas within a city may see a surge in demand if there are plans for a new airport, better road connection, or a metro link in the vicinity. Investments in such areas would yield attractive returns in the next two or three years when these infrastructure projects are complete. On the other hand, some other areas may fall from favour due to other factors (higher prices or delay in infrastructure projects).

Flat interest rates
A major support to falling property prices is the fact that interest rates may not go up soon. Most experts feel that home loan rates might have peaked because inflation may gradually come down. Besides, the sharp fall in home loan disbursals over the past few months and healthy margins of most banks may prompt lenders to offer discounts during the festive season.

Your strategies
If you plan to buy, look for projects that are complete and developers who have only a few apartments left. Developers often want to exit such projects completely and would be willing to give discounts.

Upsizing: A weak market is the perfect opportunity to upsize. It's a good idea to sell property in downtown areas and move to a bigger place in an upcoming suburb. The fall in the established downtown area would be less than the decline in prices in the suburbs.

Downsizing: Bearing in mind that property prices may not go up in a hurry, you could sell a bigger house to shift into a smaller one. The balance money could be invested for a period of 1-2 years. Even without taking the returns into consideration, there are savings on costs of maintaining a smaller property.

Whether you are a buyer or a seller, you need to act now and grab the opportunities presented by this market. Putting your decision on hold and renting because prices might fall further means you are gambling with economic probability rather than moving on with your plans for owning a home.

Why you should shop now
• Prices have come down by 20-25% in some markets
• Builders willing to offer discounts in festive season
• Interest rates have flattened; may not rise any more
• In some markets, prices may not fall any further